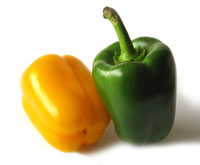 This one’s pretty easy. It’s pretty much impossible to eat too many vegetables. Keep in mind that veggies aren’t just for dinner. Making them a part of your lunch and as snacks is one way to eat more. Pile that sandwich high with cucumbers, peppers, lettuce, tomatoes, onions. Anything that you like. Things that you don’t think you like you might if you give them a second chance.

Make plans to have an extra helping for dinner. It won’t add many calories and helps fill you up.

I often have patients say, “I don’t like vegetables, doc.” When I ask them if there are any that they do like I always get a good response. The reply is “Sure, I love spinach.” As I ask about more vegetables I get more positive responses. Make a list for yourself of the veggies that you like and keep them on hand. It will be longer than you think.

Vegetable side dishes and vegetarian recipes:

You can read more about the science of why eating veggies is so good for you in these articles:

What actually works to keep the weight off: There's a lot of talk, but not a lot of hard data, to show which weight-loss and weight maintenance strategies are actually effective. Fortunately, an article published last year in the International Journal of Behavioral Nutrition and Physical Activity sheds some light on the subject using a fairly straightforward strategy: asking successful dieters.

Fruits and vegetables for prostate health: Benign Prostatic Hyperplasia (BPH) happens to almost all men as they age. It's a non-cancerous enlargement of the prostate whose most common symptom is difficulty in urination. Usually it's not a serious problem, but it can affect the sufferer's quality of life. Just how much someone's life is affected by their BPH symptoms is measured by a standard questionnaire called the American Urological Association Symptom Index (AUASI). The higher the score on the questionnaire, the more the patient is bothered by their symptoms.

Like parents, like kids: Experts in pediatrics have identified four important activity and dietary recommendations for children's health. They are: Total fat intake of less than 30% of caloric intake per day; 60 minutes per day of moderate to vigorous physical activity; watching television (including video games and the like) for less than two hours per day; and eating at least five servings per day of fruits and vegetables.

Eat your fruits and vegetables and keep your mouth happy: Oral cancer, primarily a disease that occurs in men, was the seventh most common form of cancer—for both sexes—in 2002. Over 210,000 death are caused each year by oral cavity and pharynx cancers. The primary risk factors are well known and include chewing and/or smoking tobacco and consuming alcohol. Often nutritional and dietary deficiencies are linked to oral cancers, but recent research studies have sought to determine the effect of fruit and vegetable intake.

Eating more CAN mean weighing less! Weight management is a simple mathematical formula: calories in must equal calories out. The simplest advice for weight loss, then, is to eat less. Easy for some people, but for most people simply eating less means feeling hungry and dissatisfied, especially when large portions of high-calorie foods are so widely available. To combat this, organizations such as the American Diabetes Association have recommended that instead of simply eating less of the same foods, they should eat the same amount of foods, but switch to those that are lower in calories.

Tomatoes, Olive Oil, and Heart Disease: The Mediterranean Diet has been shown to protect against heart disease, but just why it does so isn't quite clear. Its effects have been credited to a variety of foods in the typical Mediterranean Diet, including components of the fruits and vegetables and the red wine. The effects have also been credited to tomatoes and tomato products, which are an important source of lycopenes. . . .

Mix Up Your Veggies and Fruits: It has been well established that eating vegetables and fruits (VF) has many health benefits. Most research indicates that it is the antioxidant properties that are responsible for their positive effects. Some of the most widely studied have been ingredients from specific botanical families, including the cabbage family, the lily family (garlic), citrus (such as oranges) and the family that includes tomatoes.

Carrots really satisfy you: Studies have shown that fiber intake has a strong impact on satiety (the feeling of fullness and satisfaction after eating), but few studies have looked at fruits or vegetables specifically. Researchers in Dublin, Ireland noted that tested vegetable combinations that included more carrots seemed to yield greater satiety, and devised a study to investigate why.

More fruits and vegetables, less heart disease: I've written on many occasions about the positive effects of fruit and vegetable consumption on such conditions as oral cancer and gallbladder disease, as well as contributing disease factors like inflammatory markers and DNA oxidation. A recent French meta-analysis of the results of several prospective studies has specifically examined the relationship between fruit and vegetable intake and risk of coronary heart disease (CHD).

Eat your antioxidants: People often rely on vitamin supplements to make up for their poor diets. This is especially true now that we know that some vitamins, such as antioxidants (vitamins E, C, or beta-carotene) or B vitamins, have been shown in the lab to help prevent such conditions as cancer, heart disease, and high cholesterol. But are the supplements actually having the same impact as a diet that contains more vitamins through diet alone?

The war on obesity is not limited to adults: Children are becoming overweight right alongside their parents. Since eating habits are formed in childhood, researchers in pediatrics are examining how parents can best help their children form healthy eating habits. To do that, the researchers need to evaluate what strategies parents are currently using and how well they work.

Is it "Healthy" or "Junky"? "Drink your milk; it will help you grow big and strong," a parent tells her child. At what age are children able to correctly classify foods according to whether they are good for them or not?