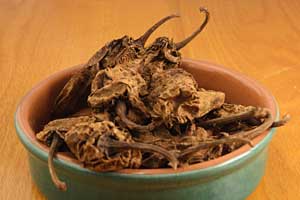 Chipotles are actually jalapeno chilies that have been smoked and dried. The intense flavor is spicy and has lovely undertones of smoke, chocolate and sweet peppers. If the peppers are not going to cook for very long, I will often soften them by steaming for about ten minutes.

Usually found in ethnic or gourmet markets, dried chipotles are also sold packed in cans in adobo. This is a sauce made of vinegar, dried chili peppers, herbs and spices, usually in a tomato puree.

I like to keep cans of chipotle in the pantry and after I open one I put in a jar in the refrigerator (because I will never use but one or two peppers at a time). I use tongs to handle both dried chilies as well as canned—they can burn your skin if you are not careful. You might want to wear rubber gloves, as you don't want these in your eyes! Mince the canned chilies until they are a fine paste so that they will blend well with your recipe. (See Also: Hot Peppers)

Ask Dr. Gourmet: How long can I store chipotles in adobo in my refrigerator?
I love a nice sauce or marinade made with canned chipotles in adobo sauce occasionally. Since I do not use the entire can at once, I store them in a small plastic container with lid in the refrigerator. I recently tossed some out which had been in the fridge about two months because I did not know how long they may safely be stored. I know that the peppers and spices are probably safely stored for quite some time, but because the adobo contains tomatoes and I have heard some horror tales about tomato sauces stored too long, I want to make sure. Please advise.

Will eating spicy foods help you lose weight?
There has been research that indicates eating meals spiced with chilies increases fat burning as well as the amount of energy used by the body. Researchers have felt that this might be an approach to fighting obesity, and in an interesting study reported in this month's American Journal of Clinical Nutrition (2006;84:63-69), a group of 36 volunteers agreed to eat chilies for the advancement of science.

More hot research!
I reported last year on a study that evaluated the effect of eating chilies on blood sugar levels and metabolism (Hot research! 7/14/06). Unfortunately, that study's results suggested only that the amount of insulin needed to control a person's blood sugar might be decreased after eating a meal containing chilies, but that the amount of energy the person burned - their basal metabolism - was unaffected.

Rice, Chilis, GERD and IBS
Irritable Bowel Syndrome (IBS) is characterized by chronic symptoms of abdominal pain, bloating, and constipation or diarrhea (or both). As many as 15% of people in the United States suffer from this disorder, which is treated both with medications and also with dietary adjustments. Gastroesophageal Reflux Disease (GERD) is defined as chronic symptoms of acid reflux from the stomach into the esophagus: heartburn is the most common symptom. It is also treated with medications and dietary adjustments.