How to eat more fruit
For those of you who follow Dr. Gourmet faithfully, you know how much I think of eating fruit. Of course, it's really healthy and for sweet snackers it makes the perfect treat. Adding servings each day to your diet can have a profound effect on both short and long term health. Study after study proves this.

Why is fiber good for you?
Fiber is what your grandma used to call "roughage." It's not one particular food, but it's simply the part of foods that your body can't digest. Fibers are technically carbohydrates, but your body doesn't have the enzymes to break them down like it does with sucrose. As a result, they're not absorbed and essentially have no calories.

What is a healthy dinner?
When I was growing up we had the typical diner Blue Plate Special of "a meat and two veg." This isn't too far from what makes sense for a healthy dinner. We know that combining protein with carbs helps you to feel satisfied for longer after a meal. One problem many people have is that they don't know what to actually put on their plate. 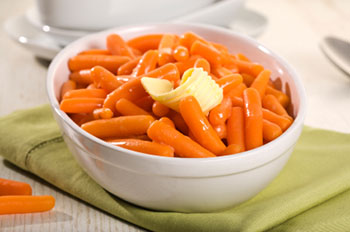 Studies have shown that fiber intake has a strong impact on satiety (the feeling of fullness and satisfaction after eating), but few studies have looked at fruits or vegetables specifically. Researchers in Dublin, Ireland noted that tested vegetable combinations that included more carrots seemed to yield greater satiety, and devised a study to investigate why (Brit J Nutr 2006;96(3):587-595).

Thirty-six women were recruited from the non-faculty staff at the University of Ulster. All were between the ages of 20 and 40, had a Body Mass Index within the normal range, with no known food allergies, not on any medications known to affect appetite, and were otherwise generally healthy.

Once a month for three months, the women were asked to eat a standard breakfast, then later in the day they were to go to the study center at the university, where they were given a sweet and sour chicken lunch that appeared to be similar over the course of the three months. After lunch and every forty-five minutes afterward they answered a questionnaire regarding their impressions of the meal, its flavor, and its quality, including how satisfied they felt afterwards. Later in the afternoon they returned to the study center for a buffet snack that they could choose themselves (their choices were measured and recorded covertly). Finally, for the rest of the day they kept a food diary of everything they did not eat in the study center.

The researchers note that the study subjects took longer to eat the whole-carrots meal than the other two meals and that the subjects reported feeling significantly less hungry after eating the whole and pureed-carrots meals than the carrot nutrient meals. This was borne out by their behavior at the afternoon meal and in their food diaries: when they consumed the meals containing more fiber, they ate less throughout the rest of the day.

Regardless of whether you're trying to lose weight or just eat healthy, carrots are a great snack. They're high in fiber, low in calories, and contain lots of Vitamins A and C (and 8.1mcg of Vitamin K in a medium carrot). Keep some fresh carrots in the refrigerator for when you get the munchies.