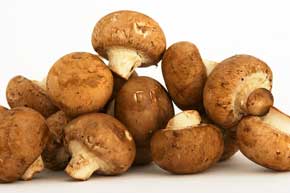 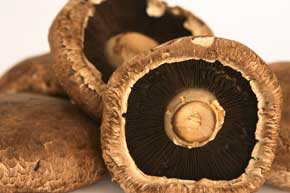 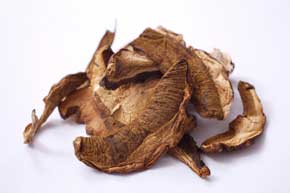 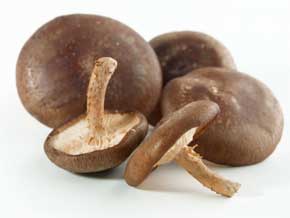 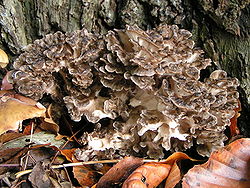 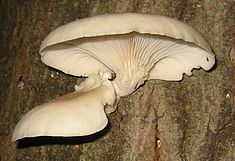 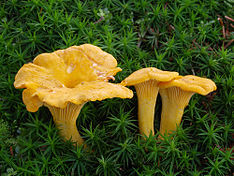 It wasn't until I was working in restaurants in the early 70's that I fell in love with mushrooms. All that was available then were white mushrooms, but they were fantastic and my conversion came with a delicious mushroom salad made fresh tableside at a restaurant where I worked.

Fast forward 40 years and Americans have become mushrooms eaters. Each of us now consume about four pounds a year, up from only a pound in 1965. And there are a wide variety available to us. While we don't consume anywhere near the 22 pounds per person per year that the Chinese do, we do now have access to mushrooms that most of us had never heard of in the 1970's.

Freshness is easy to spot with any mushrooms. Avoid those with dark spots or soft, squishy mushrooms. Turn the mushroom over and check to see if the gills are exposed. The "ring" is the soft covering that joins the edge of the cap to the stem, and if it is not intact and the gills can be seen, the mushroom is past its prime. This is the best indicator of freshness for all mushrooms.

The idea of not rinsing mushrooms because they absorb water is myth. Mushrooms are about 80% water to start with, and numerous published tests have not shown that there is a significant amount of water absorbed when mushrooms are washed.

Crimini mushrooms are marketed under many names, including Baby Bella, Roman, Italian, Brown or Classic Brown mushrooms. They are similar in size to white mushrooms but are a light cocoa color and have a firmer texture. They are much more flavorful than white mushrooms, having a richer, earthy taste that activates the umami taste buds. Their flavor has often been referred to as meaty.

Portobello mushrooms are actually large crimini mushrooms, and because of the savory meaty flavor have become popular in the last few years. As mushrooms mature, the ring that protects the spores breaks and as a result there is loss of moisture. Young mushrooms contain as much as 80% water, and as they lose water (as portobellos do by having their gills exposed), the savory mushroom flavor is increasingly concentrated.

If you are going to use portobellos in a recipe that has liquid or a sauce, scraping the gills from the mushroom before cooking will keep the sauce from turning black. Some taste will be lost, but there will still be plenty of rich mushroom flavor.

Porcinis are known as cèpes in France. These are generally larger flat mushrooms that have a wood brown color on the domed cap. The gills underneath are a white color when fresh and young and turn more yellowish as the mushroom ages. Smaller mushrooms are better, having a more intense flavor.

Fresh porcini are not widely available in the U.S. as they are in the U.K and parts of Europe. Dried porcini are, however, easy to find but expensive. The dried mushroom makes a great flavoring for stocks with an earthy, umami flavor.

Making porcini dust: Simply purchase dried porcini mushrooms and grind them up. I use the mini chopper that came with my stick blender. It takes only a few seconds. Do be careful not to overfill the mini chopper. I did once and the motor on the stick blender overloaded and burned up (oops).

I purchase my porcini mushrooms in the bulk bin. Before you look at the price, try to prepare yourself for the sticker shock. This can be as much as $35.00 per pound. That's about $2.00 per ounce, and one ounce of dried mushrooms makes 1/4 cup of porcini dust (4 tablespoons). Four tablespoons will go a long way, as it usually takes only about a tablespoon or so to enrich enough pasta or risotto or a sauce for four servings. It's best to keep your mushrooms sealed in a zipper bag (I double bag mine). Don't make any more dust than you need because it will lose flavor quickly.

This works well with any dried mushrooms, but I feel that porcinis have a more true mushroom flavor.

The Japanese suffix "take" means mushroom and the Shiii tree is the tree on which these lovely mushrooms grow naturally. They are indigenous to Korea and Japan and for years were available around the world in dried form but are now widely cultivated and available fresh.

The cap is broad and flat ranging in color from a tan to dark brown. The stems are tough and woody, but they add an earthy flavor to soups and stocks, so don't toss them out. As with all mushrooms, the clear indication of quality is a veil that is still closed on the underside of the cap covering the spores. This shows freshness but also indicates if the mushrooms were rushed in growing. It is hard to find very fresh shiitake mushrooms and most are at least a few days old.

The Japanese have three grades of shiitake - Donko, Koko and Koshin. Donko are higher grade having thick, firm caps, while the lower grade koshin have thin flat caps. Koshin are faster growing and are the more common cultivated strain. Some feel that these mushrooms are not worth purchasing. Koko are intermediate grade.

The Japanese translation for maitake is “dancing mushroom” and it makes sense. These are undulating mushrooms that grow in clusters at the base of trees. In the west these are often sold as hen-of-the-woods or ram's head mushrooms. They are a robust meaty flavor but are more delicate than shiitake mushrooms.

Oyster mushrooms grow in larger flat caps similar to shiitake but are lighter and more delicate in flavor and texture. The caps of the mushrooms grow attached directly to the tree and there is usually no stem (or a very small one). As they grow larger they lose their delicate flavor and are tougher and more meaty.

I particularly love chanterelles. They are not easy to come by in most groceries and even specialty stores won't carry them year 'round. They are trumpet shaped with the stem forming the underside of the cap. The most popular is the golden chanterelle. They are an orange-yellow color and have a meaty but clean mushroom flavor. While they maybe quite expensive you will find that a little goes a long way. One small mushroom is enough to make terrific scrambled eggs for two.

One of the best Web sites is MykoWeb, although it is focused more on California hunting. There are a lot of books that you should take as a guide if you are going hunting and these are reviewed on this Web site.

The Ohio State University has a quick Fact Sheet on Wild Mushrooms that is a great place to start. Again, this is localized to Ohio, but there are many mushrooms that might grow where you live. There are very helpful pictures to help with identification.