Exercise Really Is Key to Weight Loss and Maintenance
A couple of years ago I reported on a study that showed the importance of exercise in achieving and maintaining weight loss (News Bite, 11/03/06). At a minimum, the National Institute of Health and the Center for Disease Control recommend thirty minutes per day of exercise on most days of the week, or 150 minutes per week. Studies also show, however, that the difficulty is not really in losing the weight - it's in keeping it off for the long term.

Keeping It Off
We all know that it's one thing to lose weight - and quite another to keep it off for the long term. A study funded by the National Institute of Health and published recently in JAMA(2008;299(10):1139-1148) compares two strategies people might use to help maintain their weight loss: regular personal contact with a counselor via telephone or unlimited access to an interactive weight maintenance website. Could an online program take the place of an actual human being for the purpose of helping people maintain their weight loss?

What actually works to keep the weight off 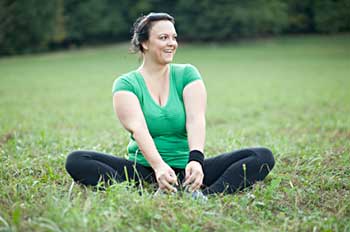 There's a lot of talk, but not a lot of hard data, to show which weight-loss and weight maintenance strategies are actually effective. Fortunately, an article published last year in the International Journal of Behavioral Nutrition and Physical Activity sheds some light on the subject using a fairly straightforward strategy: asking successful dieters.

In the written survey, respondents were also asked to specify which of 18 strategies they had used to lose weight. The options included such commonly-recommended strategies as reducing the amount of food they ate, exercising at least 30 minutes per day, or eating more fruits and vegetables, while other strategies included using over-the-counter diet products, eating meal replacement products, or eating less high-carbohydrate foods. Similarly, they were asked which of six behavioral strategies they used to control their weight in the long term, such as daily weigh-ins, measuring the food they put on their plate, and planning their meals.

The Dr. Gourmet Diet Plan is a great way for you to implement the successful behaviors of meal planning, portion control, and fewer fatty foods. But the key to long-term weight maintenance is clearly exercise: 30 minutes per day, most days of the week.