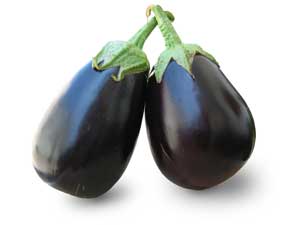 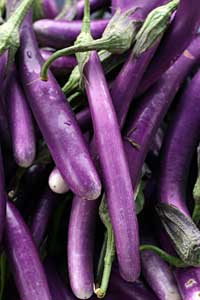 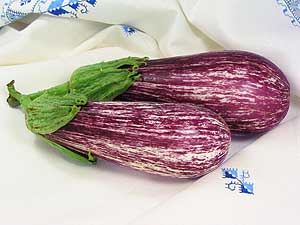 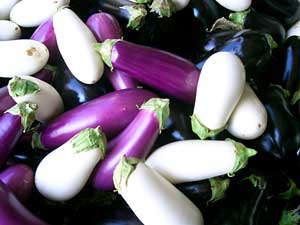 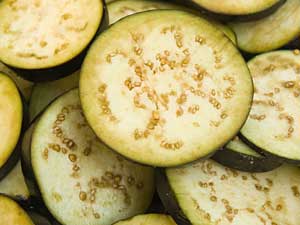 Eggplant is a member of the nightshade family as are tomatoes, peppers, potatoes and sweet potatoes. As such, eggplant is technically a fruit. As with tomatoes and other of nightshade veggies there are a number of varieties of eggplant. You'll find a wide assortment in your market these days. While it is known as eggplant in much of the western world in the U.K. this lovely ingredient is called by the much sexier aubergine (sounds like a heroine in a racy romance novel).

The large dark purple pear shaped eggplant is the most common. I love the hefty feel of a large fresh eggplant, but the larger they are the less flavorful they will be and the tougher the skin. I generally look for fruit that is no more than about 1 lb (about 8 inches long and 4 inches in diameter).

The smaller version of the larger purple skinned eggplant is often called Italian or baby eggplant. These have a somewhat more intense flavor and the flesh is much more tender.

The straight thin eggplants known as Japanese or Asian eggplant have thin delicate skins like Italian eggplant but the flesh is sweeter. The color ranges from dark purple to a striped purple as well as a light amethyst. Because of the sweet flavor and delicate texture, these are the type that I use for any dishes where I may want whole slices or chunks such as Ratatouille.

White skinned eggplant is now widely available and it is this variety that gave eggplant its common name. Also delicate in flavor, they are especially beautiful when grilled.

The flavor of eggplant is fantastic and the great thing about it is that it is so good for you. There have virtually no calories (about 20 calories in a cup of raw fruit). There's very little fat or carbohydrates but it has fair amount of fiber (2 grams in a cup).

Use eggplants as soon as you can because the flesh turns bitter quickly, even when they are not overripe. Some of the bitterness of older eggplant can be removed by slicing them and then liberally sprinkling the cut edges with salt. After about twenty minutes, rinse the eggplant well.

There are as many variations on the reasons for using salt on eggplant as there are celebrity chefs. The main reason to use salt on eggplant is because they have a very high moisture content. When eggplant is broiled or cooked in a pan, it will usually steam and end up being mushy. The solution is to draw the moisture out. By sprinkling salt on the eggplant, water is drawn to the surface.

I have seen recommendations for using kosher salt. The only difference between kosher salt and regular table salt is the size of the granules. Crystals of salt (no matter what the size) dissolve in the moisture on the surface of the eggplant and form a concentrated salt solution. The high concentration of salt then pulls moisture from inside the fruit. Rinsing and patting dry the eggplant won't result in it absorbing a significant amount of water (it is porous but not a sponge). The more salt you use or the longer it is on the eggplant, the more effective this technique will be.

The other reason given for salting eggplant is to remove bitterness. This is a bit of an old wives (chef's) tale. Eggplant becomes bitter as it ages. All of the salt in the world can't change that. The key is to buy fresh eggplant and use it quickly.

Eggplant has a very short shelf-life, so it is best to buy the day that you are going to use them. Look for an eggplant with a smooth unblemished skin. Those with small pits are not fresh and any darkening or brown spots indicate bruising. They are ripe when you press on them lightly and they give slightly but spring back into shape. If it remains dented where you pressed, it is overripe - don't buy it.

More fruits and vegetables, less heart disease
I've written on many occasions about the positive effects of fruit and vegetable consumption on such conditions as oral cancer and gallbladder disease, as well as contributing disease factors like inflammatory markers and DNA oxidation. A recent French meta-analysis of the results of several prospective studies has specifically examined the relationship between fruit and vegetable intake and risk of coronary heart disease (CHD) (J Nutr 2006;136:2588-2593).

Eat your fruits and vegetables and keep your mouth happy

Oral cancer, primarily a disease that occurs in men, was the seventh most common form of cancer—for both sexes—in 2002. Over 210,000 death are caused each year by oral cavity and pharynx cancers. The primary risk factors are well known and include chewing and/or smoking tobacco and consuming alcohol. Often nutritional and dietary deficiencies are linked to oral cancers, but recent research studies have sought to determine the effect of fruit and vegetable intake.

All the more reason to eat your vegetables
Non-Hodgkin lymphoma, a particularly virulent form of cancer of the lymph nodes, has been associated with DNA damage caused by free radicals in the body. Anti-oxidants are thought to reduce this risk. Previous studies that investigate the link between fruits and vegetables and the anti-oxidants they contain have been inconclusive, however.

Avoid gallbladder surgery - eat your fruits and vegetables!
Surgery is the most common treatment for gallstones: over 800,000 Americans have their gallbladders removed every year. Although most studies of gallbladder disease and prevention focus on specific nutrients in the diet, scientists at the University of Kentucky Medical Center decided to take a broader approach. They chose to investigate whether fruits and vegetables, which are protective against other chronic diseases, might also protect people from gallbladder disease (Amer J Med 2006;119:760-767).