Snacking on junk gets boring
One of the ways that scientists are approaching the question of weight control is by looking at what causes people to stop eating. One cause, known as "metabolic satiety," describes the hormonal changes that signal the brain that the stomach is full and eating should stop. Another type of satiety is called "sensory specific satiety," which describes the way that a food you are eating becomes less pleasant or tasty as you continue to eat it.

If It's Not Available, They Can't Eat It
Way back in May of 2007 I reported on the Intitute of Medicine's report and recommendations for school nutrition standards. In that News Bite I mentioned that the Institute recommended specifically that each school district limit their students' opportunities to choose foods that are not nutritionally approved. 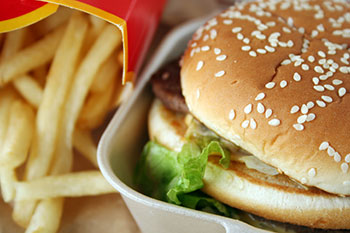 "Drink your milk; it will help you grow big and strong," a parent tells her child. At what age are children able to correctly classify foods according to whether they are good for them or not?

Researchers at the University of North Carolina recently sought to find out (Appetite 2007:48(1);114-118) by recruiting 48 children (evenly divided among ages 3, 4, and 7) and 16 adults to respond to a simple questionnaire. For children, the questionnaire consisted of showing the child a labeled photograph of a food and asking them, "Is [insert name of food] a healthy food or junky food?" The 70 foods pictured ranged from an apple to cheetos and were presented in a random order. Similarly, the order of the words "healthy" and "junky" were also presented randomly.

After completing all 70 food classifications, the subjects were asked to explain why they had classified 3 different foods as healthy and 3 as junky. Their responses were grouped into three categories: nutritional food properties ("lots of vitamins"), health outcomes ("you get sick" or "makes you strong"), and miscellaneous ("I don't know," or "Turn into a corndog").

As one might expect, the ability to correctly classify foods as healthy or junky correctly increased with age. Three-year-olds fared the worst: their number of correct responses were only slightly better than random chance. Four-year-olds, however, correctly labeled foods as "healthy" or "junky" almost 75% of the time, while 7-year-olds did slightly better: 78% correct. What appeared to confuse children included junky foods made from vegetables (such as French fries) or meats (hamburgers, corn dogs), although grain foods (doughnuts, Pop-Tarts) also gave them difficulty.

Both children and adults tended to focus on the health outcomes of food when asked to justify why they had labeled a food "healthy" or "junky".