Calcium & Vitamin D Supplements: The Risk/Benefit Ratio
Not long ago I got an email from a Dr. Gourmet reader who was frustrated by some of my answers to Ask Dr. Gourmet questions. For example, the question about whether drinking diet soda is linked to obesity. There isn't a lot of evidence, and it certainly doesn't show that drinking diet soda will cause obesity, but it doesn't look like drinking soda of any kind is all that great an idea, especially when coffee, tea and water is definitely great for you.

Need to improve your cholesterol profile? Make sure you get enough calcium
One recent study involving weight loss appears to show that high calcium intake, whether in pill or dairy food form, will help reduce blood pressure and improve one's cholesterol profile. So was it the weight loss that did it, or the calcium in the dairy? Scientists at Laval University in Canada designed a study to help make that distinction (Am J Clin Nutr 2007;85:54-9). 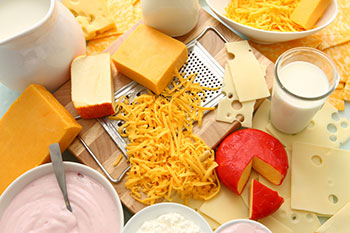 Today's article is another one that I've seen all over the news: the headlines imply that adding more dairy products to the Mediterranean Diet improves metabolic scores such as blood pressures, cholesterol scores, and insulin and glucose levels. From the abstract's conclusion:

Following a MedDiet with additional dairy foods led to significant changes in markers of cardiovascular risk over 8 wk. The MedDiet supplemented with dairy may be appropriate for an improvement in cardiovascular risk factors in a population at risk for CVD [cardiovascular disease] (Am J Clin Nutr 2018;108:1166-1182).

The authors recruited 41 men and women between the ages of 45 and 75 who were at risk of cardiovascular disease. In an order assigned randomly, the participants followed either a modified Mediterranean Diet (supplemented with additional dairy products that provided the recommended daily supply of calcium) for eight weeks, or a Low Fat control diet for eight weeks. The two diet periods were separated by an 8-week washout period, during which the participants returned to their usual diets. The subjects met with dietitians biweekly to discuss their assigned diets to help with maintaining their assigned diet, and turned in dietary records as well.

At the start and end of both diet periods the participants underwent blood pressure testing as well as having blood drawn for cholesterol and other scores. They also underwent body composition testing to measure their lean and fat mass.

Until you get access to the full paper and read the full article.

I might not have sought out this particular article if I had not seen a retweet in my Twitter feed. The person retweeted Dr. Gregory Miller, PhD, who simply said, "Dairy Foods Can Fit Into a Mediterranean Diet." Accurate enough, but I noticed that his Twitter handle is @drdairy50. He works for the National Dairy Council: it's his job to promote dairy consumption.

Dr. Miller is not listed as an author on the study and likely had nothing to do with the study himself since it was performed in Australia, but I'm wary of industry employees like Dr. Miller who are paid to lend the weight of their expertise to various food industries. So I read the article and noted a few troubling points.

First, the study was funded by a Dairy Australia Research Grant. To be fair, the article also states that "Dairy Australia had no role in the study design, implementation, analysis, or interpretation of data." Although Dairy Australia does not appear to have supplied dairy products for the study, The Almond Board of Australia donated almonds and other manufacturers donated cheese, extra-virgin olive oil, legumes, tuna, and salmon. Not something that can in and of itself condemn the quality of an article, but something to bear in mind. This is, after all, why we require such disclosures.

Third, the comparison diet was a low fat diet. Participants were instructed to follow their regular diet, but choose low fat versions of foods and follow "LF [low fat] cooking methods," consuming less than 20ml of oil per day and less than 2 teaspoons of butter or margarine per day. They were not instructed to avoid "biscuits, pastry, and ice cream," but to choose low-fat alternatives.

It's true that for a long time those at risk of cardiovascular disease were instructed to follow a low fat diet. And certainly the "low fat" diet instructions described in this study sound very much like the kind of advice we physicians might have given regarding a low-fat diet.

Further, while there's some evidence that consuming full-fat dairy products might reduce your risk of diabetes, increasing your intake of higher fat dairy products has been shown to be related with greater weight gain over a 12-year period.

Lastly, although the authors seem to be very concerned about making sure Australians consume enough calcium, they conveniently ignore the long list of foods that are also high in calcium that are not dairy products, including fortified cereals and orange juice; spinach, collard greens, turnip greens, and Swiss chard; almonds; and even sesame seeds. By no means are dairy products the only significant source of calcium in people's diets, and you don't have to consume dairy products to get enough calcium.

Even if the better metabolic scores versus a low-fat diet are in spite of the addition to the amount of dairy products (testifying to the power of the Mediterranean Diet), the fact remains that dairy's effects on health are mixed and there are sources of calcium that are not dairy that are easily incorporated into a Mediterranean Diet. Assuming that a Mediterranean Diet is deficient in calcium is specious at best.