Drink Your Juice and Protect Your Bones
About 10 million Americans have osteoporosis, which is the condition of having low bone density. Most often found in the elderly, it is most obvious in the condition known as "dowager's hump," in which an elderly person's spine is so fragile that they are permanently bent over. Even more seriously, osteoporosis can lead to easily broken bones, even in the large bones such as the hip joints, and can also prevent adequate bone healing in those who have osteoporosis.

What's the Best Supplement for Your Bones?
For years women (and more recently, men) have been told to take calcium supplements to help avoid osteoporosis later in life. Or rather, they should take calcium in combination with vitamin D. Some recent studies have suggested that vitamin D is even more important than calcium in preventing bone less, while others have led to the opposite conclusion.

Drinking milk may be bad for your bones 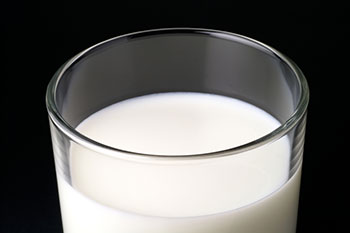 For years, if not decades, we have been told to drink our milk in order to build strong bones. Milk is a good source of calcium, Vitamin D, and phosphorus, all important nutrients for bone formation and maintenance, so many people are told that they should drink at least three glasses a day to help prevent fractures and osteoporosis.

The problem is that research on the effects of drinking milk on either bone density and the risk of fractures has been somewhat conflicting, with some studies focusing on calcium intake - from sources that include both milk and other sources of calcium - others focusing on Vitamin D, and yet other studies lumping all dairy intake together. Worse yet, milk is a major source of a substance called D-galactose, which is a byproduct of digesting the lactose in milk and has been linked, at least in theory, with increased levels of oxidative stress and chronic inflammation, which we know is linked to greater risk of heart disease and cancers as well as greater risk of bone loss.

At the start of both studies, men and women, the participants filled out a dietary questionnaire designed to assess their regular diet for the past year as well as a demographic questionnaire including such questions as education, marital status, physical activity, and smoking status. The women were again surveyed ten years later, and a smaller, representative group of men and women from each cohort provided urine and blood samples, enabling the researchers to analyze blood markers of oxidative stress, inflammation, and indirect measures of milk intake.

Through the Swedish government the researchers could track the incidence of bone fractures in the participants as well as deaths and their causes. After excluding bone fractures not related to bone density (such as those caused by tumors), and taking into account an extensive list of such variables as caloric intake, physical activity, height, weight, smoking status, and menopausal status, the researchers discovered that compared to women who drank less than one glass of milk per day, those women who drank more than 3 glasses of fluid milk per day were 16% more likely to experience a fracture anywhere in their body - and 60% more likely to experience a hip fracture. Their risk of death from any cause was 93% higher, while their risk of death from cancer increased by 44%.

On the other hand, men's risk of fracture of any kind was not associated with their fluid milk intake, while their risk of death only increased by about 10% - mainly in risk of death from cardiovascular disease.

The opposite appeared to be the case, at least for women, when the researchers looked at cheese and fermented dairy (i.e., yogurt) products. For women, higher intakes of cheese and yogurt meant lower risks of mortality and fracture, with each increasing serving reducing the risk by between 10% and 15%. Men's reduction in risk for mortality or fracture were much smaller or did not exist at all.

The authors caution that the greater effects in women may be due to their being surveyed more than once about their intake, providing greater sensitivity to their analyses. Further, the findings might not be applicable to those with high rates of lactose intolerance, more ethnically diverse populations, or children or adolescents. The take-home message for you is that this supports a higher intake of fermented dairy such as yogurt and cheese and less drinking of fluid milk - as described in the Mediterranean Diet.