Inflammation and depression
Research in both adults and children has linked eating more fast food to a greater risk of depression. We've also seen that a higher adherence to a Mediterranean-style diet is associated with better quality of life in general, both physically and emotionally, as well as an improved overall mood.

Fast food linked to depression in kids
The World Health Organization estimates that at least 20% of all children suffer from a mental health disorder, and as many as half of all mental health issues are known to first appear in adolescence. 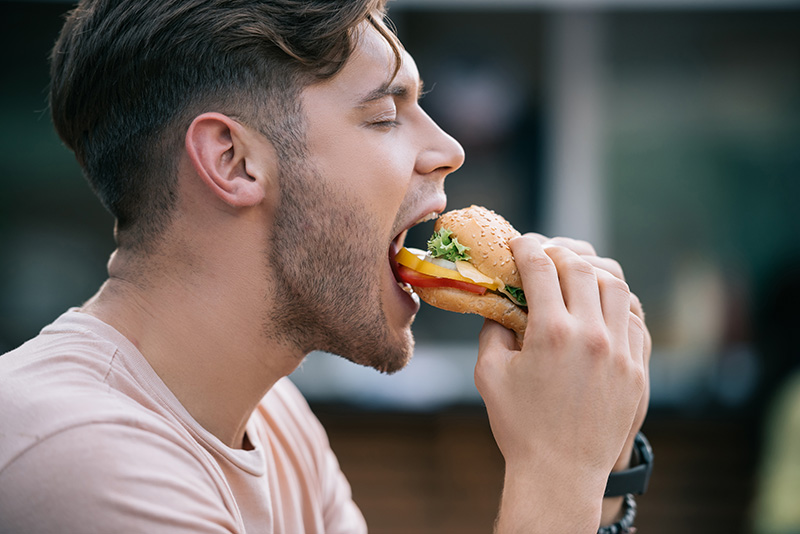 We've seen that both adults and children who ate more fast food are more likely to experience depression, and that women whose diets were more pro-inflammatory were also more likely to be considered depressed as measured by screening tests.

But is that cause, or effect? A team in Australia designed a randomized controlled trial to find out if improving the diets of those with diagnosed depression might improve their symptoms (Am J Clin Nutr 2022;116:572-580).

The authors recruited 72 men between the ages of 18 and 25 who had been diagnosed with depression by their physician. As a screening tool, their scores on a standardized measure of depressive symptoms (the Beck Depression Inventory II) had to indicate moderate to severe depression.

Their usual diet was evaluated using an Australian dietary survey known as the Commonwealth Scientific and Industrial Research Organization (CSIRO) Diet Survey, which measures an individual's adherence to the Australian Dietary Guidelines on a scale of 1-100. Scores over 75 are considered "good" while scores under 40 are considered "poor". Only those prospective participants whose diets scored below 40 were accepted.

The accepted participants were randomly assigned to one of two groups. The test group received dietary advice from a one-on-one visit with a clinical nutritionist counseling them on the Mediterranean Diet. The initial session focused on improving dietary quality while reducing intake of ultra-processed or fast foods and provided the participants with information on recommended numbers of servings per week of the components of the Mediterranean Diet, along with recipes, suggested meal plans, and easy "swaps".

All advice was tailored to fit in the participant's food budget, and each participant received a $50 basket of Mediterranean foods to help make the diet easy to follow. (The control group received $50 gift cards to an Australian grocery store at the end of the study.) Follow-up sessions at weeks 6 and 12 were designed for goal setting and addressing any challenges the participants faced.

The control group received "befriending" support sessions of the same frequency and duration - 3 visits of 1 hour each:

"Befriending involves the researcher talking to the participant about neutral topics of interest such as movies, sports, and hobbies. The aim is to keep the participant engaged and interested. Befriending is an effective, credible, and acceptable validated control therapy for psychological studies and appropriate to participants suffering from mental illness."

Throughout the 12-week study, the participants used an app on their mobile device to track everything they ate, which allowed the researchers to track how well the test group adhered to a Mediterranean style diet and monitor the consumption of those in the control group. Neither group was told to limit calories or change their level of physical activity: they were explicitly told that the study was not to assess weight loss.

At weeks 6 and 12 both groups of participants were again evaluated with the Beck Depression Inventory II. At baseline both groups scored between 33.5 and 34.8 (a range considered moderate to severe depression). At 6 weeks the Mediterranean Diet group's score had improved to an average of 19.8 - generally considered "mild" depression - while the control group's score improved to 29.7 - still "moderate".

At 12 weeks the Mediterranean Diet group had improved even more, to 14.1: just over one-third of the young men in this group reported "low to minimal depressive symptoms". The control group also continued improvement - to an average of 27.3 (again, still "moderate depression").

This is an impressive bit of research, suggesting that improvements in diet can have a significant positive impact on symptoms of depression in young men. "Considering the overall poor diet quality of depressed young males... this research provides a promising treatment option," noted the authors, especially since the changes took place in only 12 weeks with just 3 visits to a clinical nutritrionist.

Many people, both men and women, are struggling with depression in this possibly-post-COVID era. If you are, please seek treatment, starting (at least) with your primary care physician.

As part of your treatment plan, you might consider looking at your overall diet and seeing if there are a few tweaks you might make to improve it. Small changes can make a big impact on your health - both physical and mental.