Are dairy products good for you?

Dairy Products in the Mediterranean Diet 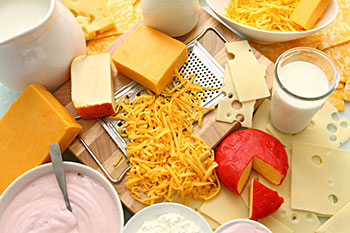 Dairy products are one of the nine elements of the Mediterranean Diet, and consuming less than about 8 ounces per day (around a cup of yogurt) gives you one point. Most of the dairy products consumed by those in Mediterranean cultures are usually in the form of fermented products like yogurt or cheeses, and many of those are made from goat or sheep's milk. Cow's milk is not drunk as a beverage as often as in the United States.

Research on dairy tends to yield conflicting results, and much of it is funded by The National Dairy Council. The studies performed are often very small and in many cases appear biased.

For instance, the Dairy Council once had an advertising campaign stating that consuming dairy three times a day could help with weight loss. The fact is that those who increased the amount of dairy products they ate gained more weight over the course of a 12 year study than the ones who decreased their dairy intake the most during the same period. This may be because they increased their intake of higher fat dairy products, because researchers found that consuming low-fat dairy products was not associated with weight change. (Am J Clin Nutr March 2006, 83:3 559-566)

The dairy council doesn't run ads about dairy and weight loss any longer, but my patients will sometimes claim that they believe it's true (great ad campaign, no?). There have been a few reports evaluating this claim, and one study looked at nearly 30 different trials that had used everything from low-fat milk and powdered milk to cheeses and yogurt. Dairy was associated with weight loss only in those studies that required participants to reduce their caloric intake. Those who cut their calories also lost significantly more body fat than those who ate dairy and followed their usual diet.

In fact, when research subjects ate dairy and followed their usual diet they did not lose weight. When the researchers compared shorter duration studies of less than 1 year with longer studies they found that body fat decreased in the shorter, calorie-restricted studies but increased in the longer studies. (Am J Clin Nutr, 2012, 96:4, 735-747)

There has been some speculation that higher calcium intake might help with weight control, but that has also been disproven. Likewise, research into such things as colon cancer and fat absorption in those consuming dairy have been inconclusive.

We do know that higher calcium and Vitamin D consumption is important, especially for bone health, but there are many other food choices that are high in calcium.

Here are some examples of foods high in calcium:

When using cheeses in cooking, you should select the best quality cheese for the most flavor. For instance, true  Parmigiano-Reggiano cheese is much better than domestic parmesan (and many times better than the stuff in the green can). It can be a little more expensive to buy the better quality ingredient, but there's so much flavor you'll need much less.

Having a glass of milk every now and then is fine, and most folks have milk on their cereal or in their coffee. You do not, however, need to eat dairy products to be healthy or to lose weight.

Make dairy products part of your life (but maybe a smaller part).