Prevent Diabetes without Losing Weight
If you've been following Dr. Gourmet for even a little while, you know that we're all about translating Mediterranean Diet principles for the American kitchen. Hundreds upon hundreds of well-designed studies document the positive effects of a Mediterranean-style diet upon blood pressure, cholesterol scores, and conditions both major and (comparatively) minor as heart disease, cancer, Alzheimer's Disease, pneumonia, and osteoporosis. We also know that a Mediterranean diet can help prevent diabetes.

Which fats are linked with diabetes risk?
In today's article the authors dig deeper into the risk of diabetes (Am J Clin Nutr 2017;105:723-35). For this analysis they excluded any participants who had type 2 diabetes at the start of the study, along with those who lacked initial glucose scores or food frequency questionnaires (both of these, among other tests, were administered yearly throughout the study). 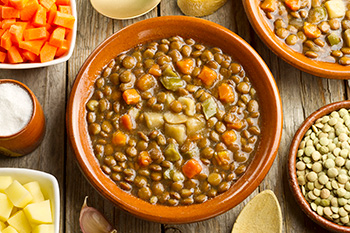 The authors of the PREDIMED Study continue to assess the data gathered during their study (Clin Nutr 2018; 37(3);906-913), which began in October 2003 and ended in December 2010. The original study compared three different dietary variations on the risk of heart disease: a Mediterranean-style diet supplemented with extra-virgin olive oil, a Mediterranean-style diet supplemented with nuts, and a low-fat diet.

The original participants of the PREDIMED study include 7,447 men and women who were at higher risk for cardiovascular disease: they had been diagnosed with type 2 diabetes or they had at least 3 of the following qualifying conditions: high blood pressures (systolic blood pressure 140 or over, diastolic blood pressures 90 or over or taking high blood pressure medications); diagnosed high cholesterol scores (LDL cholesterol at least 160 or taking cholesterol-lowering medications, or low HDL scores (less than 50 in women and 40 in men); or a BMI of at least 25. For the purposes of this article, the authors excluded those with diagnosed type 2 diabetes at the start of this study, leaving 3,349 men and women who still had at least 3 of the conditions considered to put them at risk of heart disease.

At the start of the PREDIMED study and every year thereafter the participants responded to lifestyle and dietary questionnaires that assessed their adherence to a Mediterranean-style diet in general and also measured legume intake in particular, with the legume questions asking about intake of lentils, chickpeas (garbanzo beans), dry beans, and fresh peas, with frequencies ranging from never or almost never to more than 6 servings per day. Using these responses the authors could calculate the number of grams of legumes consumed per day for each participant.

The authors identified those participants of this sub-group who developed type 2 diabetes over the course of the (averaged) 4.3 years, and compared their intake of legumes as well as other dietary and lifestyle factors with those who did not. The authors broke out legume intake into four increasing levels and adjusted them relative to the participants' total caloric intake.

This is a prospective study, but it still relies on people reporting their own intake of foods. However, rather than their consumption being measured only once, their intake was measured yearly over the course of the study. Further, the researchers took into account the participants' total Mediterannean Diet score (other than legumes) as they performed their comparisions, making it less likely than total legume intake actually represented a better (higher) Mediterranean Diet score or better quality of diet overall. In short, this research suggests that more legumes in your diet, especially if they replace the same number of calores in refined grains like white rice and white bread.