Live longer with more plant-based protein
I am frequently invited to speak about the Health Meets Food curriculum, a set of 30+ combination online and hands-on cooking classes created to train physicians-to-be, practicing physicians, and allied health professionals how to have a more substantive and effective conversation with their patients about food and health.

Vegetarian required? The evidence isn't in
When people talk about 'plant-based diets', most people assume that the speaker is referring to a vegetarian diet (no land or water-based animal protein, often including dairy and eggs) at the very least - while often the speaker means not just a vegetarian diet, but a vegan diet (no animal-sourced products at all, including no dairy products or eggs whatsoever). 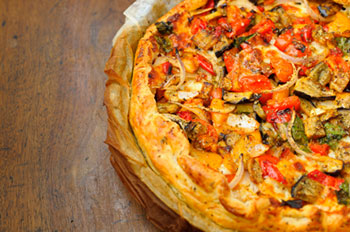 In the last few weeks I've shared with you studies that undermine the idea that the "best" diet is a vegetarian or vegan diet. One looked at the amounts of protein in a population's diet - both proteins from animal sources as well as totall overall protein intake - and found no association between those levels of protein intake, animal or otherwise, and risk of death from illness in general or from specific illnesses such as heart attack or stroke.

Another study suggested that there might be health risks, such as an increased risk of stroke, associated with a vegetarian diet.

Researchers with Harvard's School of Public Health as well as its medical school and affiliated hospitals searched the medical literature and identified 9 prospective studies of people 18 and over that looked at dietary patterns and their relationship to diabetes incidence. Their research is what is known as a meta-analysis, in which the data acquired in multiple studies is standardized and pooled in order to provide stronger results (JAMA Intern Med 2019;179(10):1335-1344).

Almost all of the studies took into account such common risk factors for diabetes as Body Mass Index, age, and family history of diabetes, at a minimum.

The authors found that overall, "greater adherence to plant-based dietary patterns" meant a 23% lower risk of developing diabetes. They noted, however, that this included foods that might be plant-based but weren't particularly healthy, such as refined grains, starches, and sugars (that is, doughnuts might be vegetarian - but they're not good for you).

When the authors looked more closely at the foods consumed and refined "plant-based" to mean "healthful plant-based" - including more whole grains, fewer refined grains, legumes, and fruits and nuts - they found the risk of diabetes to be moderately lower: 30% versus 23%. Indeed, 3 of the included studies found that unhealthful, yet plant-based dietary patterns actually increased the risk of diabetes.

The take-home messages here are twofold: first, it's not necessary to go vegan or even vegetarian to eat healthy and reduce your risk of diabetes. The authors note that "In all studies included in our... meta-analysis, the highest category of adherence to plant-based dietary patterns still included a significant amount of animal foods". These ranged from just a few ounces to about 4 servings of foods from animal sources per day.

Second, this emphasizes the importance of the quality of the foods you put in your mouth: while a calorie is a calorie, you don't consume calories - you consume foods. Make sure your foods include more whole grains and less refined grains, less sugar and more fruits and vegetables, and more plant-based proteins like legumes and nuts and more fish and shellfish and less red and processed meats.