Live longer with more plant-based protein
I am frequently invited to speak about the Health Meets Food curriculum, a set of 30+ combination online and hands-on cooking classes created to train physicians-to-be, practicing physicians, and allied health professionals how to have a more substantive and effective conversation with their patients about food and health.

Vegetarian required? The evidence isn't in
When people talk about 'plant-based diets', most people assume that the speaker is referring to a vegetarian diet (no land or water-based animal protein, often including dairy and eggs) at the very least - while often the speaker means not just a vegetarian diet, but a vegan diet (no animal-sourced products at all, including no dairy products or eggs whatsoever).

The health risks for vegetarians 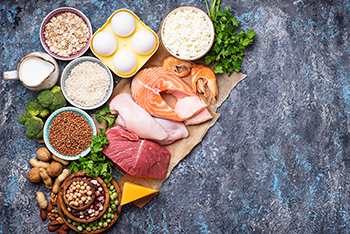 Last week I shared with you an article that concluded that "Higher total and animal protein intake was not associated with risk of overall mortality or cause-specific mortality."

Another blow against the belief that the "best" diet for everyone is a vegetarian (or even better: vegan) diet.

Today's article shows that even vegetarian or vegan diets can have drawbacks other than needing to eat more carefully to make sure you're getting the right nutrients.

Researchers at Oxford University in the UK made use of information gathered through the EPIC-Oxford Study, which began inviting people to join the study between 1993 and continued recruitment through 2001. Participants were at least 20 years of age at the start of the study and were enrolled both by mail and through their physicians (general practitioners) (BMJ 2019;366:l4897).

Upon recruitment participants responded to a questionnaire that included questions regarding diet and lifestyle, health and medical history, and demographic information, and a followup questionnaire was sent to enrollees in 2010, with the study ending in 2016.

For their analysis the researchers excluded those whose questionnaires were incomplete or otherwise unreliable, as well as those who reported a history of heart attack, stroke, or angina prior to the date of recruitment. This left over 48,000 participants.

Linkage to the UK National Health Service allowed the authors to know which participants had experienced heart disease, heart attack, or stroke (and subtypes of stroke). They then correlated the participants' diets with the reported health events.

After taking into account variables such as history of high blood pressure, poor cholesterol scores, smoking status, age and gender, physical activity, diabetes status, and Body Mass Index, the researchers found that vegetarians/vegans (the two were analyzed together due to the small number of vegans) had a lower risk of heart attack and heart disease than those who ate land animal protein.

Those in this study who did not eat land animal protein had lower circulating levels of B12, vitamin D, certain amino acids, and omega-3 fatty acids, but had slightly lower Body Mass Index and better cholesterol and blood pressure scores, which may partially explain the difference in risk of heart attack versus stroke.

This suggests that question of which is the "best" or "healthiest" diet are more nuanced than some people would like you to think: as a primary care physician, I believe that the best diet, whether omnivore, pescetarian, lacto-ovo vegetarian, or vegan, is the one that works for you - that you can maintain for the long term. For most of my patients, that's a Mediterranean-style diet, which allows you to eat a wide variety of foods - fantastic, delicious, healthy foods - while still eating healthy.