Lean, unprocessed red meat part of a heart-healthy diet - and may help with weight loss
It's getting better, but I still have patients who believe that red meat is bad for them, and that if they want to eat healthier, they have to give up all red meat.

Will eating more vegetables reduce the risk associated with red meat?
The research is quite clear that red meat is not something you should be eating every day. Too much red meat has been implicated in a greater risk of developing colon cancer, breast cancer, heart disease and diabetes, and an overall greater risk of death from any cause.

Colorectal Cancer
We all spend a lot of time thinking about diet for many things - diabetes, weight loss, hypertension, heart disease - but the fact is a great diet offers as much protection from cancers as it does from the usual suspects of cardiometabolic risk. 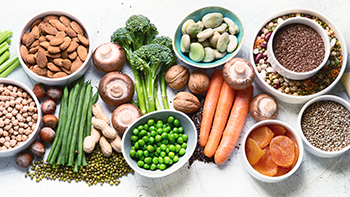 I am frequently invited to speak about the Health Meets Food curriculum, a set of 30+ combination online and hands-on cooking classes created to train physicians-to-be, practicing physicians, and allied health professionals how to have a more substantive and effective conversation with their patients about food and health.

In those lectures I talk about the Mediterranean Diet as a "plant-based" diet. People often misinterpret that "plant-based" descriptor as meaning "vegetarian" or even "vegan".

Nothing could be further from the truth.

The Mediterranean Diet does not cut out all animal proteins or even all land animal proteins (as opposed to water-living animal sources of protein like fish or shellfish).

With that in mind, in today's Health & Nutrition Bite I want to share with you a long term, observational study performed in Japan that compares protein intake from plant or animal sources with risk of death from certain causes (JAMA Intern Med doi:10.1001/jamainternmed.2019.2806)

This particular study made use of data gathered through the Japan Public Health Center-based study, which began enrolling participants between the ages of 40 and 59 in 1990. Three years later another ~78,000 people were added to the study from locales other than those in the original cohort. At the start of the study and every 5 years thereafter, the participants responded to dietary and lifestyle questionnaires, while the researchers were able to track the participants' deaths and their causes through Japan's centralized health records.

For this study the authors excluded from their analysis anyone with a history of cancer, stroke, heart disease, kidney disease, or unrealistic caloric intake, leaving almost 71,000 people's records to be analyzed.

Given their interest in the source of protein in the participants' diets, the authors used the participants' food frequency questionnaires to estimate each participants' protein intake from animal versus plant sources, then correlated that intake with the number of deaths from various causes that occurred over the total of over 20 years of follow-up.

In their analysis the researchers took into account a number of variables, from the total number of calories a participant consumed, to the number of calories consumed from the different types of fat in an individual's diet, to Body Mass Index, smoking status, coffee or green tea consumption, carbohydrate intake, and more.

Somewhat surprisingly, they found that "Higher total and animal protein intake was not associated with risk of overall mortality or cause-specific mortality."

Let me spell that out for you again: eating more protein from animal sources did not increase the risk of dying from any cause in general or from any particular cause.

Further, and more significantly, replacing 3 ounces of processed meats (such as sausage or deli meats) with the same amount of plant proteins meant:

In other words, this association does not mean that eating less animal-based or even red meat protein had a direct effect on how long a participant lived: this analysis only shows that people who ate [this] tended to also die [of that]. Nor does this mean that you should go vegan [defined as consuming no animal products whatsoever] or even vegetarian [defined as consuming perhaps no land animal meats like chicken or beef, perhaps no land animal products like cheese or eggs, etc.].

What this does mean is that too much red or processed meat is bad for you. Keep your intake of unprocessed red meat (lean beef or pork; no, pork is NOT 'the other white meat') to a 3-4 ounce serving once every couple of weeks, while saving processed red meats like bacon or sausage to an occasional (once every few months) treat.

We also know that fish and shellfish are great for you: have them as your dinner protein about 3 times per week, with the rest of meals divided between mostly vegetarian, then lean poultry, then lean beef and pork. You can still eat great food while still protecting your health: you just have to be mindful of how you choose your meals.