Plant Sterols in Chocolate
I'm sure you've seen them at the supermarket: foods that have been enriched with plant sterols. These compounds have been shown to help improve cholesterol scores - so much so that the FDA has approved the use of a health claim about it on foods that contain plant sterols.

A Little More Effort, a Lot Less Eaten
Last week we talked about how a little bit of effort - specifically, walking about 6 feet - made study participants eat fewer chocolate candies than having the bowl of candy on the participants' desk.

One Way to Resist Cravings
Most people have cravings of some kind, whether it be for an addictive substance like alcohol or cigarettes, or for something benign, like chocolate or french fries.

Most satisfying: dark or milk chocolate? 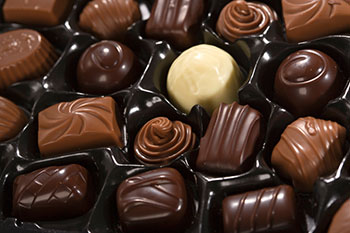 People think of chocolate as a guilty pleasure, much like coffee. Both, however, are good sources of antioxidants, and as we've seen, the antioxidants known as flavonoids that chocolate contains have been linked with a reduced risk of Alzheimer's Disease and improving both blood pressures and cholesterol scores. Still, unlike coffee, chocolate is high in calories, making it something to consume with caution, especially if you are working on your weight.

There have been studies to suggest that different types of chocolate (dark vs. milk) might have varying effects on satiety, but the results have been mixed: in one study, consuming milk chocolate reduced intake at a later meal, while in another, consuming dark chocolate had the same effect. A team in Australia noted that neither of those studies included white chocolate (Appetite 2017;116:544-551), nor did the studies ensure that the types of chocolate used had the same amount of flavonoids in the cocoa solids, which can only come from using different chocolate types made from a single batch of cocoa beans.

Accordingly, they designed a study that corrected those issues and recruited 13 postmenopausal women to participate in their feeding study. (The things people will do for science!)

The participants were all between 50 and 65 and were not diabetic, were non-smokers, were not dieting, and admitted to "regular consumption of all types of chocolate (white, milk and dark)." On three separate occasions over the course of three weeks they visited the lab first thing in the morning and consumed about 500 calories in the form of either dark chocolate, milk chocolate, or white chocolate, with one type served at each of the three visits. All of the chocolates were made from a single batch using single-origin cacao beans and specifically manufactured for the study (note that the study was not funded by a chocolate company, nor did the chocolate company provide the chocolate for free).

Ninety minutes after consuming the chocolate the participants were served an identical test meal, a type of instant oatmeal (remember this was breakfast time), in a standardized amount large enough to ensure there would be some left over after the participant ate until they were "comfortably full." The authors could then weigh the leftovers and know exactly how much the participant had consumed.

The day before each visit the participants kept 24-hour food diaries and avoided caffeine, alcohol, chocolate, and "vigorous physical activity," and on the day of the visit completed multiple questionnaires to measure mood and appetite as they changed over time, both before and after consuming the chocolate and the standardized meal. Further, the authors took multiple blood samples to measure levels of blood glucose and appetite-related hormones to see how these would be affected by chocolate consumption and if they in turn affected hunger and mood.

This is a very small study but does suggest that somehow dark chocolate is more satisfying than milk or white chocolate. The authors were careful to match the number of calories consumed in each type of chocolate, but then the amounts by weight were slightly different, with about 3 ounces consumed for the dark chocolate, 3.2 ounces of milk chocolate, and 3.3 ounces of white chocolate. They were, however, careful to ensure that the cacao used in each type of chocolate came from the same batch, so a difference in flavanol or other micronutrient nutrient content can be ruled out. If you must have your chocolate but are working on your weight, it would appear that dark chocolate would be a better, more satisfying, and higher in antioxidants choice.