'Tis the Season for Cocoa....
Especially, it appears, if you have heart disease. Like tea, coffee and wine, cocoa is rich in flavonoids - plant compounds that have been associated with a reduced risk of Alzheimer's Disease (Good News for Those Who Love Chocolate, Wine or Tea), as well as improving cholesterol scores (Plant Sterols in Chocolate) and even high blood pressure (Hot Chocolate for High Blood Pressure).

Desserts are good, chocolate is better!
The key to making dessert part of your healthy diet is that you should consider desserts as a special part of your life. They are not something that should be eaten every day. If you are using eatTHISdiet to lose weight, then dessert should be considered a serving that you substitute for another portion maybe once a week.

What is the recommended daily allowance of chocolate?
The question of how much cocoa one should eat for its antioxidant benefits is so open ended and I will admit that I don't have an answer for it. On the other hand, chocolate - as opposed to cocoa powder - is very high in calories, with the average chocolate bar (about 1.5 ounces) having over 200 calories. 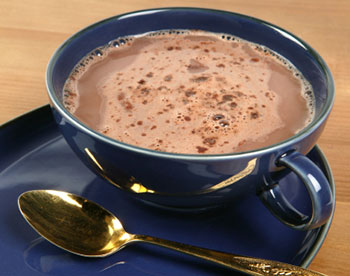 It's a good idea for those with high blood pressure to make sure they're getting enough fruits and vegetables in their diet. Not just for overall health, but because the polyphenols, or flavonoids, in fruits and vegetables have been linked with reduced blood pressure and lower risk of heart disease. Yet the foods with the largest amounts of polyphenols are not foods at all but beverages - tea and cocoa. A group of German scientists recently published the results of a meta-analysis of research on tea and cocoa intake and blood pressure (Arch Int Med 2007;167:626-634). (A meta-analysis is a study in which the scientists look at a number of previously-performed, similar studies to effectively pool their results.)

The researchers identified five different studies of the effects of cocoa intake involving 173 people, and five studies of tea drinking effects involving 343 people. All of the studies included people who did not have high blood pressure as well as those with high blood pressure, tested actual tea or cocoa intake and not just ingredients from tea or cocoa, utilized control groups (those who did not drink tea or cocoa), and lasted at least seven days.

Of the five cocoa studies, four showed a reduction in blood pressure after cocoa intake, but none of the tea studies did, whether they tested black or green tea.

The scientists note that the effects of drinking cocoa are similar to the results seen by giving patients beta-blockers like Inderal® or Lopressor® and could therefore reduce the risk of stroke by 20% and heart disease by 10%. That said, these studies have two significant drawbacks: first, that the participants in these studies knew what they were drinking and were therefore not "blinded" to the treatment - we can't rule out the placebo effect. Second, these ten studies included only about 500 people - still a fairly small study even taken together.

By no means should this study make you stop taking your beta-blockers in favor of drinking hot chocolate if you have high blood pressure. On the other hand, hot cocoa is a great way to get your chocolate fix. The box of powdered cocoa (not hot chocolate mix!) in your pantry probably has a recipe for old-fashioned hot cocoa on the back, to be made on the stovetop using milk. Follow the instructions using 2% milk and you've got a cure for your chocolate craving with 230 calories but only 6 grams of fat.