Halloween Candy Is Your Friend: Really!
Halloween is one of my favorite times of the year, but the challenge is that there's always a lot of leftover candy. Having all those sweets around the office can be tempting, and it's pretty easy to rack up a ton of extra calories at this time of year. You can, however, make the season work for you. 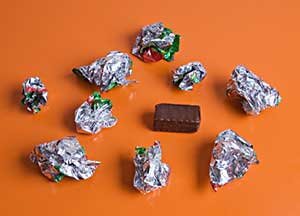 Last week we talked about how a little bit of effort - specifically, walking about 6 feet - made study participants eat fewer chocolate candies than having the bowl of candy on the participants' desk. In a study in the journal Appetite (2013;71:89-94), researchers in Switzerland took the study idea and ran with it: how small did the effort need to be to affect intake? They created 3 different studies to assess the effects of different types of effort on intake.

Okay, so it appears that more effort led to eating fewer chocolates. What if the food in question wasn't something that was considered "unhealthy?" Would effort then make a difference? For the third study they added dried apricots to the test items, resulting in four conditions: unwrapped chocolate candies to be eaten with the fingers, unwrapped candies to be picked up with tongs, unwrapped dried apricots to be eaten with the fingers, and unwrapped dried apricots to be picked up with tongs. As you might expect, all of the participants ate more of the apricots than the candy. Yet the participants still ate significantly more when they could pick up the food with their fingers.

Knowing that a little more effort to obtain the food can result in eating less can be applied to your life in two ways: first, think of ways to make eating less healthy items a more effortful experience. This might mean always using utensils or taking the time to put a portion onto a plate or in a bowl rather than eating directly out of the package. Second, make eating healthier foods easier to eat. Buying prewashed salad greens is more expensive than washing and cutting your own (especially if you don't use it all before it goes bad), but it reduces the effort needed to make yourself a salad. Similarly, keeping a favorite fruit or vegetable on hand in a ready to eat form (pre-peeled carrots come to mind) can make it easier to choose that quick, healthy snack.