Frequent snacking
At nearly every lecture I give about eating healthy, somebody asks about snacks. Although there's no scientific evidence that eating more frequently speeds up one's metabolism, people seem to have bought in to the idea, and so snacking, at least among my patients, has become the norm.

Good news about salt substitutes
Estimates of average sodium intake by American adults range from as little as 3,000 milligrams per day to over 10,000 milligrams per day (that's 10 GRAMS or about 3 teaspoons). Prepared foods, including frozen and boxed meals, have been identified as a major source of sodium in people's diets, and we've seen in our Dr. Gourmet's Food Reviews that some companies have turned to using salt substitutes to reduce the amount of sodium in their foods while still maintaining that salty flavor people seem to crave.

Fast Food: Not Much Better (but at least no worse)
I know from talking to my patients that people eat a lot of fast food, but I hadn't realized that over 25% of adults in the United States eat fast food at least twice a week. Overall, fast food accounts for 15% of food consumed in the U.S. Even worse, children eat more fast food than they eat at school.

The importance of reading the Nutrition Information 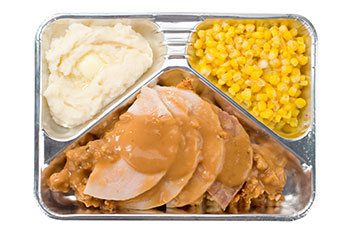 One of the goals of Dr. Gourmet is to get people back into the kitchen, cooking their own meals from scratch. If you've been following Dr. Gourmet for more than a few days, however, you're probably aware that we do review what we call "convenience meals" (frozen, single-serving meals). We do get a fair amount of criticism for it, but we realize that although home-cooked meals are best, people do eat convenience meals and it's just plain silly to pretend that people are going to stop completely. Better to help those who do choose to eat them to make better-tasting, healthier choices.

While many people eat convenience meals for lunch at the office, a fair number of my patients tell me that they regularly eat convenience meals at home for dinner, as well. They feel that it's easier and faster than cooking, but healthier than take-out. This seems to match the attitudes of those in the United Kingdom, where an article just published in the journal Appetite (2015;92:36-42) surveys the nutritional content of what they in the UK term "ready-meals."

"Ready-meals" are pre-prepared single- or multiple-serving main courses that are available either refrigerated or frozen. The vast majority of sales of these products are of supermarket brands, and there are typically several product lines ranging from "premium" or "luxury" lines to "value," "economy," or "healthier" lines. The study authors identified six single-serving meals that were available in the majority of supermarkets and product lines and were also popular from a sales standpoint. They then did the time-consuming legwork of visiting all of the branches of ten major supermarket chains in a Northern England city and recorded the package weight, price, and Nutrition Information of all of the specified meals in each product line in the store. This was done within the space of a week in order to avoid price variations across supermarket locations.

Keep in mind that the authors were not testing every single meal in every single product line, but limited themselves to only 6 varieties: macaroni and cheese, meat lasagna, cottage pie, fish pie, chicken tikka masala, and sweet and sour chicken. While macaroni and cheese tended to score poorly no matter which product line it was from (luxury or healthier), other varieties received different traffic light scores for many of the different product lines, even in the same supermarket brand.

If you're going to eat convenience meals of any kind, don't assume that a particular brand, product line, or type of meal is necessarily going to be better for you. It's critical to read the Nutrition Information for yourself, or use a guide you can trust, like our Dr. Gourmet's Food Reviews, to help you choose the healthiest option.