More Fruit, Less Junk
There's a lot of concern about childhood obesity, and justifiably so: over 1 in 3 children (including adolescents) are at least overweight, if not obese. The Centers for Disease Control estimates that as of 2008, 20% of children between the ages of 6 and 11 are obese, while 18% of kids 12-19 are obese. They develop risk factors for heart disease that my pediatrics colleagues hardly ever saw thirty years ago, including high cholesterol, high blood pressure, and prediabetes (if not diabetes itself).

Fast Food: Not Much Better
(But at Least No Worse) 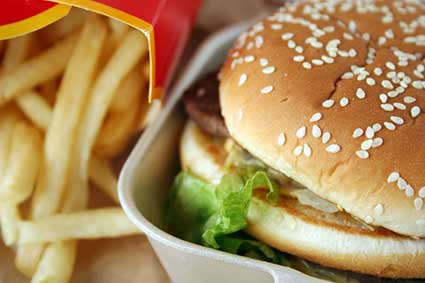 I know from talking to my patients that people eat a lot of fast food, but I hadn't realized that over 25% of adults in the United States eat fast food at least twice a week. Overall, fast food accounts for 15% of food consumed in the U.S. Even worse, children eat more fast food than they eat at school.

Fast food restaurants have been implying for years that they're improving the healthfulness of their foods, calling them "wholesome," "fresh," and "natural." But does that really mean that they're better for you than they used to be? Researchers at the University of Minnesota and Temple University made use of a fast food database maintained by the University of Minnesota to find out if foods at fast food restaurants had really gotten healthier in the last 14 years (Am J Prev Med 2013;44(6):589-594).

Nutrition information for all of the restaurants' offerings were then compared to a 100-point scoring system developed by the USDA to measure a person's diet as compared to the Dietary Guidelines for Americans. A higher score would more closely match the recommendations of the USDA for healthy eating.

As you may have already heard, overall the healthfulness of fast food offerings increased by a mere 3% over the 14 years surveyed. In fact, the restaurants scored between 37 and 56 (remember, out of 100) in 1997 and improved to between 38 and 56 in 2009. That's pretty terrible, especially when you consider that the average American's diet in 2008 was 57.5.

The good news is that 6 of the chains improved their scores (KFC the most), but the bad news is that two actually made their foods less healthy: Wendy's and Burger King.

What this tells me is that even small improvements in the healthfulness of their offerings on the part of fast food chains could have a substantial impact on America's overall diet. Dear readers, I'm realistic. I know that people are going to eat convenience foods, so I make an effort to let you know which frozen meals and convenience foods are better for you and which ones also taste good. I also know that people are going to eat fast food, so I have created some guides to making better choices at fast food restaurants. Fast food is not going to go away, nor is it going to become healthy (although I'd like to see it improve). If you're going to eat at a fast food restaurant, educate yourself on the available foods by looking at the nutrition information and choose wisely.