Blood Pressure, Salt, and Potassium
We know that diets low in sodium (salt) help to lower blood pressure. What you may not know is that diets that are high in potassium, such as vegetarian diets and those high in fruits in vegetables, can also help reduce blood pressure.

Potassium-Enriched Salt Reduces Risk of Death
You might think that it's normal for people's blood pressure to increase as they age. Unfortunately, that's only true in cultures where the usual diet is high in salt - cultures with a usual diet that's low in sodium don't see this happen. As I mentioned last week, taking potassium can help reduce one's blood pressure when doing so won't raise your potassium intake to dangerous levels.

Should those on Coumadin (warfarin) with CHF avoid salt substitutes?
My opinion about issues such as these must always be considered on a case by case basis. What might be a good choice for you could spell disaster for someone with Congestive Heart Failure (CHF). 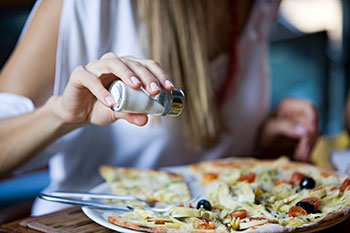 Estimates of average sodium intake by American adults range from as little as 3,000 milligrams per day to over 10,000 milligrams per day (that's 10 GRAMS or about 3 teaspoons). Prepared foods, including frozen and boxed meals, have been identified as a major source of sodium in people's diets, and we've seen in our Dr. Gourmet's Food Reviews that some companies have turned to using salt substitutes to reduce the amount of sodium in their foods while still maintaining that salty flavor people seem to crave. (We've even tested salt substitutes.)

While we might prefer that prepared food companies reduce the amount of sodium in their foods without resorting to substitutes, we can certainly appreciate that they're trying. We know that reducing salt intake can help reduce blood pressure, but what happens if a person uses salt substitutes instead?

The authors note that none of the participants had kidney problems that might be affected by using salt substitutes. If you would like to start using a salt substitute in place of regular salt, check with your doctor first to make sure that you don't have a condition, such as Congestive Heart Failure, that might be affected by an increase in potassium in your diet, as most salt substitutes are made with at least some potassium chloride. Bear in mind, however, that these salts can sometimes leave a bitter, metallic taste, so make the change gradually until you find the level of salty versus metallic flavor that's right for you.