More evidence against sweet drinks
If you've been reading the Dr. Gourmet's Health & Nutrition Bites for even a little while, you are probably aware that I'd much rather you drank water, coffee, or tea rather than sugar-sweetened beverages. Aside from the fact that they are too often excess, empty calories, we have seen in multiple studies that apart from their caloric content they have been linked with a greater risk of stroke, poorer metabolic scores, and may contribute to higher blood pressures. 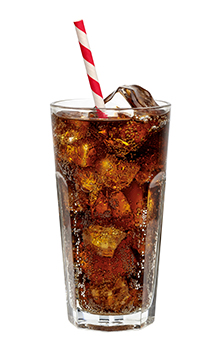 I talked just last week about the dangers of drinking sugar-sweetened beverages and repeated my recommendation that people drink water, tea, or coffee.

If only it were that easy to get people to stop drinking sodas. One of the ways people have tried to influence how much soda people are drinking is by taking a note from the fight against smoking: tax it.

A study just published in the Annals of Internal Medicine (2020;172:380-397) looks at the effect of a 1-cent-per-ounce tax on sugar-sweetened and artificially-sweetened beverages implemented in Cook County, Illinois in August of 2017. Unfortunately, the statute was repealed just four months later

Dr. Lisa Powell of the University of Illinois at Chicago and her team obtained the retail sales records of all nonalcoholic beverages sold in all supermarkets, grocery stores, convenience and drug stores, mass merchandise and dollar stores located within the borders of Cook Count during the four months of 2017 that the tax was in place, as well as the records from the same dates the year previous: 2016. Knowing that some people might simply buy their beverages where the tax was lower, they also acquired the same sales records from the surrounding area within 2 miles of the borders of Cook County.

As a comparison, they also acquired that same information from the same periods of time from St. Louis County, Missouri, a similarly-sized area without a beverage tax.

When the authors compared the average volume of sales of the taxed beverages in St. Louis from 2016 with those of 2017, the amounts were basically the same. Cook County, however, sold 27% less in 2017 than it did in 2016.

As the authors had expected, sales of taxed beverages went up in the border areas around Cook County by about 39%, with the purchase of soda alone going up a little over 50%. (Interestingly, people seemed to be mostly buying family-sized amounts - liters or multi-packs - rather than individual-sized servings.)

Untaxed beverages? Volume of sales remained about the same.

This certainly supports the idea that taxing sugar-sweetened beverages will help reduce their consumption. No, it won't eliminate it entirely - after all, people still smoke - but it can help.

Even better, it would be a good idea to earmark the funds generated by that tax to go toward healthcare related to obesity: Cook County took in over $60 million in those four months. From a 1-cent-per-ounce tax.