Is drinking soda bad for you?
It is clear that soft drink consumption is a major contributor to health problems. I have had emails from industry representatives disputing this, but their argument that drinking Coke or Pepsi has nothing to do with obesity, diabetes and other health issues is fantasy.

Beverages Aren't Satisfying
I've reported before on the observed link between soda intake and Body Mass Index. Researchers at Purdue University noted that soda is by no means the only beverage people drink. Also popular are those high-fat coffee drinks like lattes and blended cappuccinos, as well as high-protein sports drinks and specialized waters.

Stevia beverages may be boon for weight loss 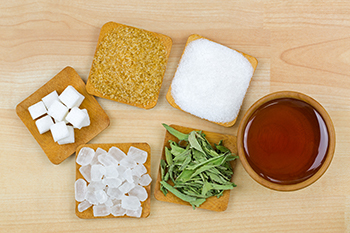 If you've been reading the Dr. Gourmet website for a while you're probably well aware that I recommend drinking water, coffee, or tea instead of sodas - even diet sodas.

One of the problems with sugared beverages, whether they are sodas or fruit juices, is that you don't feel as full or as satisfied as you would if you had consumed the same number of calories in a more solid form. The calories you consume in liquid form just don't seem to be perceived by the body in quite the same way as calories from more solid foods. Imagine if you ate a handful of nuts right before lunch. You would probably eat less at lunch, right?

Worse yet, animal research suggests that habitually consuming non-caloric sweeteners may hurt your body's ability to gauge the number of calories you've consumed - which is one of the ways your body determines that it's full and satisfied.

On yet another hand, the beverage industry would like you to believe that switching to a diet version of your favorite soft drink may help you lose weight, but we have also seen that regardless of what kind of soda you drink, those who consume more of them are more likely to become overweight as well as developing type 2 diabetes.

A team of researchers in Manchester, UK designed a fairly rigorous study to compare the effects of drinking beverages sweetened in various ways on how much an individual consumed at a following meal (Nutr 2020;150(5):1126-1134).

This is a small study including only 20 men and women of clinically normal weight with no chronic diseases (such as diabetes or cancer) and who did not drink diet sodas or use calorie-free sweeteners more than once per week.

After an initial lab visit that included measurements of height and weight, blood glucose levels, and medical history, the participants again visited the lab on five different occasions separated by at least 5 days. The night before each visit the participant was encouraged to have a similar dinner meal and then a similar breakfast meal on the day of each visit.

The 5 different beverages were as follows (all in 330ml amounts - about 11 ounces):

Three to four hours after their breakfast the participants arrived at the lab and were served the test beverage, which they were required to consume within 10 minutes.

30 minutes after consuming the test beverage the participants were served a lunch that was identical at each visit: an all-you-can-eat lunch that included sandwiches, fruit, yogurt, potato chips, and chocolate-chip cookies, along with water. The served amounts were pre-measured so that the researchers could accurately measure how much the participants ate at lunch by measuring what was not consumed.

There are two interesting outcomes, here: first is that this research seems to contradict, at least to some degree, the idea that calories consumed in liquid form have little effect on later consumption: when the participants had a calorie-containing beverage, whether it was sweet-tasting or not, they did consume fewer calories at lunch than they did when they drank the pre-meal water or stevia-sweetened water.

The more interesting outcome is that when the participants consumed the stevia-sweetened water before lunch, they consumed less at lunch - almost as much less as they did when they drank beverages that contained calories. Yet they had not consumed the excess beverage calories - meaning they consumed, on average, about 100 fewer calories at lunch.

This is a very small study and only looks at one type of non-caloric sweetener; larger studies that also compare non-caloric sweeteners like sucralose (Splenda®) or aspartame would be helpful. Further, those participating in this research were of clinically normal weight; those who are overweight or obese might not react to a pre-meal stevia drink in the same way. Finally, these participants were not regular consumers of calorie-free sweeteners; those who consume these artificially sweetened drinks all the time might also be less susceptible to their appetite-reducing effects.

Still, if you just can't give up your diet soda habit in favor of water, you might consider switching to one that is sweetened with stevia - it may well help you lose weight.