Beverages vs. food: the source of sugar matters
We know that sugar-sweetened beverages contribute to higher blood pressures, poor cholesterol scores, and chronic diseases such as diabetes and gout, and you probably are well aware of various public health initiatives aimed at getting people to reduce their consumption, from taxing the beverages themselves to limiting the size of the beverage you can purchase. From a focus on sugary beverages, however, the scope has widened to include all sugar - especially added sugars - as a health risk. 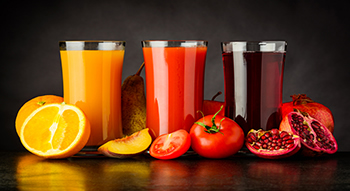 If you've been reading the Dr. Gourmet's Health & Nutrition Bites for even a little while, you are probably aware that I'd much rather you drank water, coffee, or tea rather than sugar-sweetened beverages. Aside from the fact that they are too often excess, empty calories, we have seen in multiple studies that apart from their caloric content they have been linked with a greater risk of stroke, poorer metabolic scores, and may contribute to higher blood pressures.

While one might argue that the problem is what the sugary drink is sweetened with, it seems that when people consume more sugar from their beverages, whether in the form of fruit juice, with its more naturally-occurring sugars, or from beverages like sodas with various types of sugar added, they were still more likely to have poor metabolic scores.

Given that drinking these sugar-sweetened beverages are so common, researchers affiliated with Harvard as well as the Fudan University in Shanghai, China teamed up to analyze existing data from three major prospective, observational studies to see if changes in how much of those sugar-sweetened beverages people drank were related to their risk of developing diabetes (Diab Care 2019;42:2181-2189)

The authors analyzed data gathered from the women of the Nurses' Health Study both I and II as well as the men of the Health Professionals' Follow-up Study. These large-scale, long term studies feature regular administration of dietary questionnaires as well as regular assessments of the participants' health. For their analysis the researchers utilized the records for over 192,000 men and women over an average of about 14 years of follow-up.

The authors took into account such variables as Body Mass Index, education, physical activity, and more. Compared to those who maintained their intake over the four years prior to a specific survey date, those who increased their sugar-sweetened beverage intake by just 1/2 of a serving over those four years saw their risk of developing diabetes in the following 4 years increase by 11%.

Those who increased their intake of fruit juices by 1/2 serving per day over and above their previous intake increased their risk of developing diabetes over the following 4 years by 15%.

On the other hand, those who increased their intake of artificially-sweetened beverages (that is to say, drinks like Diet Coke®) were also 18% more likely to develop diabetes.

People claim that calorie-free beverages are better for you than their sugar-sweetened counterparts, but the data just isn't looking good. I urge my patients to switch their regular consumption of sodas (sugar-sweetened or not) as well as fruit juices, to water, coffee (regular or decaf), or tea (caffeinated or caffeine-free). The evidence is stronger and stronger that the consumption of both caloric and non-caloric sweetened liquids just don't behave in the body like actual food. In short: best to avoid them.