Breakfast may not be as important as previously thought
The health and nutrition crowd has been saying for years, if not decades: "Breakfast is the most important meal of the day." Of course, that importance depends on your perspective: are you looking at eating breakfast as a weight loss tool, as a means of managing blood sugars and other metabolic scores, or something else? 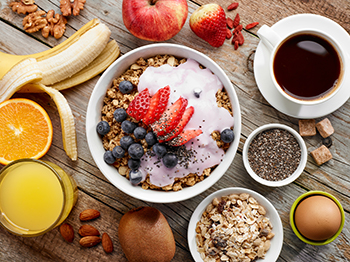 The breakfast controversy, such as it is, continues.

Skipping meals is a common weight loss strategy, and it seems like breakfast is the one people most often skip.

I understand why people do it: We typically eat three meals a day, so if you don't eat one of those meals, you must be eating fewer calories, right? And people are busy in the mornings, so breakfast seems to be the easiest to skip.

This might work if people were robots and only needed to consume 1/3 of their daily calories at each meal. Instead, appetite as well as metabolism also play a role in what we eat and how and when those calories are burned: we know from research that those who eat a breakfast higher in fiber tend to eat less at their next meal, those who have more protein at breakfast feel more full than those consuming less protein at breakfast, and when cutting calories, those who eat most of their calories in the morning tend to lose more weight than those who eat most of their calories in the evening.

One aspect of metabolism is known as "diet-induced thermogenesis." Essentially, this is the amount of heat your body produces in response to eating. This is somewhat related to the "thermic effect of food" - the fact that the body uses a certain percentage of the calories we consume for the process of digestion itself. The negative calorie diet is based on the thermic effect of food, arguing that some foods require the body to burn more calories in breaking down the food than the food itself supplies (simply not true).

While both diet-induced thermogenesis and the thermic effect of food are certainly real, they are overall still just part of the total number of calories your body burns in a day.

A team in Germany (J Clin Endocrinol Metab 2020;105:1-11) sought to find out whether diet-induced thermogenesis varied across the time of day and the amount eaten. Was there a time of day when our bodies created more heat - that is, burned more calories? Did it matter how much we ate?

For their study Dr. Richter and her team recruited 16 healthy men in their 20's who were of clinically normal weight to participate in a feeding study. Each of the participants spent three days living in the teams' laboratory on two separate occasions set at least 2 weeks apart.

The participants came to the lab in the evening of the first day to consume a standardized evening meal. They then went to bed - still in the lab - at 11:30pm and were awakened at 7am, with a standardized breakfast following at 9am, lunch at 2pm, and dinner at 7pm for the following two days.

After breakfast and dinner the authors performed multiple tests of how many calories the participants burned at rest, using sophisticated measures of oxygen consumption and carbon dioxide exhalation. The first test came 1/2 hour after the meal, then again 1, 2, and 3 hours later.

The authors were careful to maintain the participants' current body weights, tailoring the appropriate number of calories to each participant based on their weight at the initial dinnertime visit for each three-day period in the lab.

None of the participants lost or gained weight, as you might expect. But the authors found that regardless of whether the young men had a large or small breakfast, their bodies put out over twice as much heat after eating breakfast than they did after eating dinner.

This is certainly thought-provoking: might this greater thermogenesis at breakfast be one of the reasons people lost more weight eating the majority of their calories at breakfast? More sophisticated studies will be necessary to find out if the two effects are related.