What is a healthy breakfast? 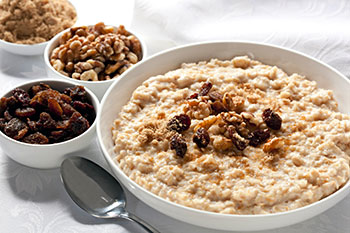 When I am working with patients I have learned that I can't help them fix everything at one appointment. Beyond the fact that there is simply not enough time in a visit, most of us can't tackle more than a few changes in our life at any one time. Sometimes I start discussing breakfast and other times lunch or snacks, but if I can engage folks to get started on eating healthy I prefer that they begin their change with the first meal of the day.

First off, most of us don't eat all that healthy, and getting the day started with something healthy both makes sense and is backed up by research pretty well. When you get up at 6:00 am it's likely that you have not eaten for 10 or 12 hours and not only is your body in need of some calories, there are daily hormonal cycles that have us programmed to eat early in the day. Going without food for that many hours alters the body's metabolic rate to hold onto stored calories, affecting your ability to maintain a healthy weight. Skipping breakfast not only means that you are working at odds with your body, but also by the time mid-morning rolls around, you are likely to be even hungrier and there is a greater chance that you will not make the best choices for your first meal of the day.

Many studies have shown that when those who are overweight consume more of their daily calories before noon they have an easier time losing weight. It has also been shown that breakfast-skippers have a higher BMI and, interestingly, breakfast eaters with a lower Body Mass Index are more likely to eat meals more regularly throughout the day. (AJCN l992;55:645-5l) Eating early in the day means you are less likely to snack later on, and research shows that people who eat breakfast snack more sensibly later in the day.

Eating a high fiber cereal at breakfast will help you feel less hungry at lunch. Compare the fiber levels of your favorite cereals or breads and pick the one that will keep you feeling fuller longer.

The prototype for your breakfast should be a great quality, higher fiber carbohydrate along with some protein and a piece of fruit. For example, an egg sandwich on whole wheat toast and a banana: good quality protein in the egg (with some equally good fats) and whole grain bread.

Researchers reviewing data from a large study of physicians found those who consumed two servings of high-fiber cereal per week had 20% lower rates of congestive heart failure. (Arch Int Med 2007;167:2080-2085) In another research study participants who ate cereals, quickbreads (like banana bread or zucchini bread) or muffins had a lower BMI when compared to those having meat and eggs, likely because the meat and egg eaters tended to consume more calories. Those having whole grain and cooked cereals fared better for folks than the ready to eat cereals or muffins. (JACN 2003, 22: 296-302)

I don't believe that the eggs mentioned in this research are necessarily the problem and eggs are a good choice for breakfast, in my opinion. It's generally what we pair with the eggs that's the problem: a couple of slices of bacon and toast and potatoes and juice. As with so many of our meals, it is the add-ons that are the challenge - not the basic ingredients. In fact, in one weight loss study of participants who had reduced their caloric intake, those who had eggs for breakfast tended to lose 65% more weight than those who had bagels for breakfast. The egg eaters also reduced their BMI by an additional 61% over the bagel breakfasters, all without increasing the participants' cholesterol levels. (Int J of Obesity, 2008: 21, 1545-1551)

Eggs are a great source of protein, quality fats, and B vitamins, but there was a time when everyone thought eggs were bad for us. Fortunately, that has now been soundly debunked. This includes both the idea that eggs cause disease and that eggs are a problem for diabetics. In one of my favorite studies a team in Australia recruited 121 overweight or obese men and women who had been diagnosed with diabetes or pre-diabetes to participate in a three-month dietary study known as DIABEGG (Diabetes and Egg) (AJCN 2015;101:705-13). Half were assigned to a "High Egg group" and half were assigned to a "Low Egg group." Those in the High Egg group were instructed to eat 2 eggs per day at breakfast, while those in the Low Egg group were told to eat no more than 2 eggs per week, while having 10 grams of lean animal protein (beef, chicken, or fish) at breakfast.

Both groups were counseled by a dietitian on replacing foods high in saturated fats with foods high in poly- and mono-unsaturated fats (for example, replacing butter with olive oil). Both groups' diets were designed to maintain the individual's body weight and both groups were told to maintain their usual level of physical activity. After three months the researchers compared the participants' cholesterol scores, glucose levels, and hemoglobin-A1c scores (a measure of diabetic control), from the start and end of the study and found that there were no significant changes in HDL cholesterol (the good cholesterol), LDL cholesterol (the bad cholesterol), or triglycerides, regardless of whether the participant ate 12 eggs per week or less than 2. Nor were there any changes in glucose levels or HbA1C scores.

Even better, those in the High Egg group reported being happier with the variety of food choices in their diet as well as feeling more satisfied after meals.

Eating breakfast regularly actually helps improve cholesterol profiles. One study found that women who didn't eat breakfast have higher total cholesterol and LDL (bad) cholesterol. Those women also had developed problems in how their insulin responds to eating. Such changes in insulin response are now clearly linked to a higher risk of heart disease and diabetes. (AJCN 2005;81:388-96)

But should you have a big breakfast, or a small one? Because we Americans are used to eating our largest meal in the evening, I advise my patients aiming for 1500 calories per day to have between 250 and 500 calories at their breakfast meal, about the same at lunchtime, and the remainder at the evening meal. Research, however, suggests that those who are working on losing weight might do better to reverse that pattern of small meal in the morning/large meal in the evening (Obesity, 2013;21:2504-2512).

For their study the researchers recruited 74 overweight and clinically obese women to participate in a 12-week diet study. All of the women met with a dietitian to plan for a 1400 calorie per day daily intake. Half of the women were directed to eat half of their calories at breakfast, while the other half were directed to eat half their daily calories at the evening meal. All of the women had their cholesterol, glucose, and insulin sensitivity tested along with their blood pressure at the start of the study as well as at regular intervals throughout the study.

Studies go on and on to reinforce the idea that breakfast is the most important meal of the day. Start with a high fiber cereal or whole grain toast, muffins, or quickbreads and you'll be satisfied and less likely to eat more during the day.

What's a healthy breakfast? Here are some suggestions.