The 5:2 diet - intermittent fasting - debunked
One of the more recent diet fads is known as "intermittent fasting": its advocates say that consuming a very-low-calorie diet on a few days per week, while consuming a normal, or even higher number of calories on other days of the week, results in greater weight loss.

Paleolithic ("Paleo") diet causes iodine deficiency
In the early part of the 20th Century, the areas around the Great Lakes, the Appalachians, and the Northwestern United States were known as the "goiter belt:" as many as 70% of children had goiter, which is an enlarged thyroid gland.

The real truth about periodic fasting vs. cutting calories
A few different best-selling diet books have popularized the idea of intermittent fasting. Two of the most popular variations on that theme are the 5:2 diet, in which you eat anything you want for five days, then consume about 500 calories each day for two days, and the alternate-day variety, in which you consume about 500 calories one day, then "what you want" the next. These are touted as being "easier than dieting" and are supposed to improve cholesterol scores, make you lose more weight than you would on a "normal" diet, and even cause you to lose more body fat.

Mediterranean diet easier to stick to than intermittent fasting, Paleo 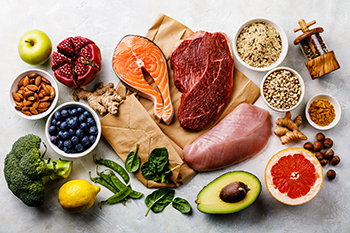 Sometimes I have to wonder why a study is published at all.

A study published recently in the American Journal of Clinical Nutrition (2020;111(3):503-514)) has basically proven what we already know, which is that without intensive support (such as medications or regular meetings with a support group or dietitian):

1. People go on a diet and lose some weight, usually in the first six months of the diet, then
2. They're not very good at sticking to the diet, and their adherence to the diet falls off over the next few months, while
3. They gain some of the weight back, and
4. Usually some metabolic factors improve - modestly.

This is why I don't talk to my patients about dieting: I talk to them about eating better and moving more. They may or may not lose weight, but they'll improve their metabolic scores. In the long run they'll improve their metabolic scores more than they would if they had dieted, because people inevitably gain at least some of the weight back after they return to their former eating habits. The key, I tell them, is finding a healthy way of eating they can stick to.

Which brings me back to today's journal article. A team in New Zealand allowed 250 metabolically healthy but clinically overweight adults to choose one of three diets to follow for 12 months: a Mediterranean-style diet, Intermittent Fasting (strictly limiting intake 2 days of the week), or Paleo. Their goal was to see how well people stuck to their diets, how much weight was lost, and the diets' effects on metabolic scores such as cholesterol scores - in the absence of intensive support and while otherwise going about their lives as usual (this is known as "free-living conditions").

This might have been interesting, but for a few issues:

First, the Paleo diet was not a Paleo diet: the authors chose to allow at least 1 serving per day of dairy products and 1 serving of "legumes or grain-based foods". The authors acknowledge that "original 'Paleo' diets strictly excluded all legumes, dairy, and grains."

Finally, at the 12-month point the authors assessed the participants' actual food intake (through food diaries filled out by the participants for multiple days of the week) and found that just half of those who had chosen to follow the Mediterranean or Intermittent Fasting diets were still following those diets. Only one-third of those who had chosen the (modified) Paleo diet were still sticking to it.

Worse yet, at the end of the study

For those who completed the study, "no statistically significant differences were observed between the 3 diets in terms of changes in body composition or physical outcomes over time." All three of the diet groups lost weight in the first 6 months of the study, but that weight loss only continued in the Mediterranean diet and IF diet groups.

The only diet that produced meaningful metabolic changes was the Mediterranean diet, which improved the participants' HbA1c (a measure of glycemic control) a "minor" amount. No other statistically significant metabolic improvements were seen.

This study doesn't tell us anything that we don't already know:

1. People go on a diet - any diet - and lose weight - all of the participants who completed the study lost about the same amount of weight regardless of their choice of diets.

2. Paleo is hard to stick to - the researchers modified the diet to include dairy and legumes and still almost half of those who chose that diet voluntarily ended up dropping out of the study completely - while 1/3 of those who didn't drop out had stopped following the diet by the 12-month point.

2. Intermittent fasting is easier to stick to than Paleo, but even then those who chose that diet couldn't stick to it very well even when they tried to actually fast: they still consumed between 200 and 300 calories more per day on fasting days than they were supposed to.

Yes, we know that it's important to be at a healthy weight for your height. But we also know that one diet works about as well as another, and even then people have a hard time sticking to a "diet."

Instead, find a pattern of eating that you can successfully stick to for the rest of your life. As you might guess, I'm all for the Mediterranean diet: the folks in this study following a Mediterranean-style diet stuck to their diets as often as those doing the Intermittent Fasting - but they didn't have to cheat.