Evidence for moderation: carbohydrates
Just last week I reported on a study that suggested that a high-protein, lower carbohydrate diet that got most of its protein from land animals was linked to a higher risk of heart failure. A lot of previous nutrition research has looked at specific nutrients (like antioxidants, minerals, or fatty acids), specific foods (nuts or olive oil), or overall dietary habits (like the Mediterranean Diet or DASH Diet), but with low-carb diets so popular in various forms over the last few decades, there's finally opportunity to look at the effects of different levels of macronutrients on long-term health. 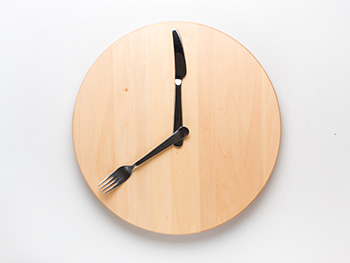 One of the more recent diet fads is known as "intermittent fasting": its advocates say that consuming a very-low-calorie diet on a few days per week, while consuming a normal, or even higher number of calories on other days of the week, results in greater weight loss. Some go so far as to claim that such a diet improves metabolic factors such as insulin levels and amounts of abdominal fat.

Naturally there are plenty of people who say that they've lost weight on such diets. In scientific circles, we call such stories "anecdotes," because without a control group, that's all they are: personal stories. (As my wife likes to say, "the plural of 'anecdote' is not 'data'.")

Fortunately a group of researchers in Germany designed a study that utilizes a control group to test whether an diet that utilizes "intermittent fasting" would yield better results - whether in total weight lost or in metabolic improvements - than a traditional diet that simply cuts the same number of calories each day (Am J Clin Nutr 2018;108:933-945).

The authors recruited total of 150 overweight or obese men and women between the ages of 35 and 65, all nonsmokers, to participate in their study. Of those, 136 men and women completed the entire 50-week study.

At the start of the study the participants were randomly assigned to one of three groups: the Intermittent Calorie Restriction (ICR) group, the Continuous Calorie Restriction (CCR) group, and the control group. After determining the daily caloric needs of all of the participants, those assigned to ICR were instructed to choose two non-consecutive days each week to consume only 25% of their daily energy requirements; the other 5 days they were to consume their normal daily caloric requirement. (For example, someone requiring 2000 calories per day was instructed to consume only 500 calories on two non-consecutive days, while consuming 2000 calories per day on the other 5 days.) This meant that on average the ICR group consumed about 80% of their required calories.

The control group was instructed to continue with their usual diet throughout the 50+weeks of the study.

At the start of the study, all three groups received dietary counseling on the recommended guidelines of the German Nutrition Society for a healthy diet; the CCR and ICR groups received more detailed counseling on maintaining a healthy diet while also following the Intermittent Calorie Restriction or Continuous Calorie Restriction. The participants also had blood drawn for metabolic testing, while some also underwent body composition testing.

The first 12 weeks of the study were designated as the "intervention" period, during which the two intervention groups (ICR and CCR) were reducing their caloric intake by their assigned method. During this intervention period the two groups met with dietitians either in person or by phone every other week to address any issues and to encourage participants to continue with their assigned diet. At the end of the first 12 weeks the participants again underwent blood tests and body composition testing. The second 12 weeks were considered the "maintenance" period, during which the ICR and CCR groups received no further contact with the dietitians. Once again the blood and body composition tests were repeated at the 24-week point (the end of the maintenance period), then again after 50+ weeks, with the last 26 weeks of the study considered the "followup" period.

The authors were primarily interested in whether the ICR or CCR diets resulted in greater weight loss, with secondary interest in whether that weight loss was maintained and the effects on metabolic scores.

This study suggests that a 5:2 diet of 5 days of normal eating and 2 non-consecutive days of consuming 25% of one's daily caloric needs will not increase the amount of weight lost, and may even mean that you are more likely to regain the lost weight. Intermittent Calorie Restriction doesn't seem to have negative metabolic effects, however, although some of those following the ICR diet in this study reported feeling "cold, tired, and having mild headaches" while others reported dizziness and cramps.