Plating Matters
Back in 2011 I told you about a group of studies that compared different food presentations on how much people liked the food. One study compared "balanced" and "unbalanced" presentations, a second compared "neat" to "messy," and a third had the subjects just look at pictures of the food used in the two previous studies, without actually tasting the food. They found that more balanced, neater presentations of such simple meals as hummus and vegetables or chicken salad were perceived to taste better.

Small Plates? Just a Myth
Just last month I reported on a study that concluded that children will eat more when presented with a larger amount of food. Another study seemed to show that using a larger bowl (or plate, presumably) would result in serving and eating more than if a regular-sized bowl is used. These studies seem to shore up the widely-held belief that using smaller plates will help you eat less.

Better research on the impact of smaller plates 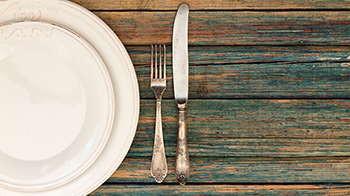 It's passed into conventional wisdom: the idea that manipulating the plate you eat from can fool you into eating less. Some say that eating from a smaller plate will have that effect, but the quality of the research is questionable, with other studies showing plate size having no effect on how much people ate.

An international team of researchers conducted a feeding study (Int J Beh Nutr Phys Act 2019;16:75) at a feeding laboratory specifically designed for their research: a lounge with a dining table and chair, a sofa and bookshelves, and a television showing a nature program.

The 134 adult men and women were served a lunch, presented on a heated serving table in the room, consisting of either a vegetarian cheese and pasta bake or chicken korma curry. The participants were randomly given either a large or small plate and were instructed to serve themselves from the serving dish on the heated table and to consume as much or as little as they wished.

They were given 30 minutes to eat, during which they were filmed with hidden cameras. (The participants were told ahead of time that they would be filmed: the cameras were hidden to minimize self-consciousness on the part of the participants.)

After analyzing how much food was consumed, the authors found that "there was no clear evidence of a difference in calories consumed between the plate size groups." Further, the only other measure, from time spent eating to bite size, that was statistically significant between the two groups was how much food was left on the plate: those using the larger plate left about 1/3 ounce more on their plate, uneaten, than those with a smaller plate.

The authors note that using smaller plates is common advice, even from quite reputable sources (including myself). They say, "The current evidence is... insufficiently conclusive to either endorse or refute such advice." Which is not to say, they admit, that this can't be one of several methods, both proven and unproven, that people use to try to control their intake.