Prettier Tastes Better
Professional chefs agree: presentation matters. That's why you'll see them carefully arranging the food on the plate for best effect, then wiping off any drips or drabs that may fall on the edge of the plate.

Small Plates? Just a Myth
Just last month I reported on a study that concluded that children will eat more when presented with a larger amount of food (News Bite, 8/1/07). Another study seemed to show that using a larger bowl (or plate, presumably) would result in serving and eating more than if a regular-sized bowl is used (10/6/06). These studies seem to shore up the widely-held belief that using smaller plates will help you eat less. 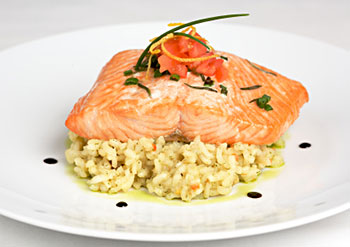 Back in 2011 I told you about a group of studies that compared different food presentations on how much people liked the food (Bite, 9/21/11). One study compared "balanced" and "unbalanced" presentations, a second compared "neat" to "messy," and a third had the subjects just look at pictures of the food used in the two previous studies, without actually tasting the food. They found that more balanced, neater presentations of such simple meals as hummus and vegetables or chicken salad were perceived to taste better.

The Culinary Institute of America (CIA), a noted culinary training institution, teamed up with the department of Psychology at Montclair State University to further explore the idea of presentation affecting taste (Appetite 2014; 77C:31-35). On two separate occasions they served identical meals of chicken with sauce, brown rice pilaf, and green beans with almonds to a total of 91 volunteers. On both occasions the meals were served on the campus of the CIA in their upscale (table linens, stemware, wait staff) restaurant.

Before the meal the volunteers responded to demographic questionnaires and reported on how hungry they felt. After the meal, the questionnaire asked them to rate the taste of the overall meal and then the individual components of the meal. The appearance of the meal was also rated.

The difference between the two meals was only in the presentation (known as "plating" in culinary circles). On one occasion the food was presented "traditionally:" the chicken (left whole) and sauce on one side of the plate, the brown rice pilaf in another section of the plate, and the green beans in yet another section. On the other occasion the food was presented in what the researchers described as a "contemporary" way: the pilaf was placed in an S shape on the plate with the chicken neatly sliced on top of it, the green beans arranged around the edge of the plate, and the sauce drizzled on top of the vegetables.

As you might guess, those eating the "contemporary" meal rated it as tasting better, overall, than did those eating the "traditional" meal. They also wrote more comments about the meal (and more positive comments overall). Interestingly, when rating the individual components of the meal, the green beans were rated about the same among the two groups: evidently presentation had little to do with how much people enjoyed eating vegetables. On the other hand, the "contemporary" arrangement appeared to help people appreciate foods they hadn't enjoyed before: one person wrote, "love it, never liked brown rice but this recipe changed my impression of brown rice" and another said, "liked this serving - I typically do not partake of brown rice."

The obvious take-home is the same as it was back in 2011: take the time to make your meals look nice and really enjoy your food. But the second, and perhaps more important, take-home is that a nice presentation may help improve your perception of foods you thought you didn't like (like brown rice). Try them again and treat the plating with care. You might find you enjoy it!