Just Thinking About Exercise
The best way to lose weight and maintain that weight loss? Eat right and exercise. There's been a lot of research on ways to help people make the effort to make changes in their diet and exercise behaviors, but recently Dr. Brian Wansink and colleagues from New Mexico and France noted that little research has been done on how exercising may actually mean eating more afterward - to compensate for the calories burned.

Right-Size Your Recipes
As you might expect, I collect cookbooks. The first cookbook I bought for myself was the Peanuts Cook Book, but the one my mother used most (and I bet yours did too) wasThe Joy of Cooking. I actually have several copies of this venerable cookbook, from the two-paperback edition from 1974 to the 1946 hardback that my wife bought me for Christmas last year. 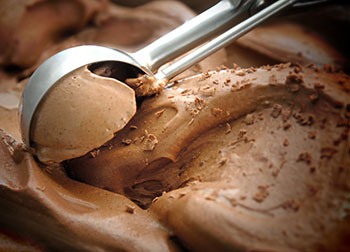 My mom loves ice cream and eats it pretty much every night. I'm not so sure that she'll be very happy with my telling you this but it wouldn't be the first time that I have done something wrong that my mother had to correct me for. She has lived a pretty healthy life and while I chide her for having a variety of choices of frozen delights in her freezer a small bowl of ice cream does make her happy.

Brian Wansink and his colleagues at the Cornell University Food and Brand Lab report on one way for you to eat ice cream and be healthier about it. They designed an elegant study reported on in this month's American Journal of Preventive Medicine (2006; 31: 240 -243). The research took place during an ice cream social that was given in honor of one of the study's authors. Eighty five nutrition experts were invited and on arrival were told that they would also be asked questions during the event.

The 85 attendees were randomly assigned to receive either a large bowl or a small bowl for their ice cream. They were also given either a larger 3 ounce or a smaller 2 ounce serving spoon. The nutrition experts were then allowed to serve themselves. After they did they were asked about such things as how the serving spoons and bowls compared to the ones they usually used, how full they thought their bowl was and how many spoonfuls they had taken.

The results showed that those using a larger bowl scooped up 31% more ice cream and those using a larger spoon an extra 14.5%. These two larger utensils were additive in that using both the larger bowl and larger spoon resulted in consuming over 45% more ice cream. Interestingly, the ones using the smaller bowl and spoon actually thought they were consuming about 4% more than they were.

My favorite observation is that only 3 of the participants did not finish the ice cream that they served themselves.

Look at the dishes and serving spoons that you use for all your foods. Are they too big? Can you make some adjustments so that you serve yourself less? One of the ideas behind The Dr. Gourmet Diet Plan is that the recipes make correct size portions in smaller amounts and leftovers are scheduled for use at lunch. This combined with the right utensils can help you eat less and be very satisfied.