Restaurant foods labeled "Gluten-free": Are they really?
There is no cure for Celiac disease, and the only effective treatment is a gluten-free diet. While that might seem easy - "just don't eat bread or pasta!" - wheat flour is ubiquitous as an ingredient in other foods: it is used as a thickener in sauces or soups, and common ingredients, like soy sauce, are made with wheat. (Fortunately there is gluten-free soy sauce, called "tamari sauce.") Foods are commonly breaded with wheat flour, and fried foods are often breaded as well. 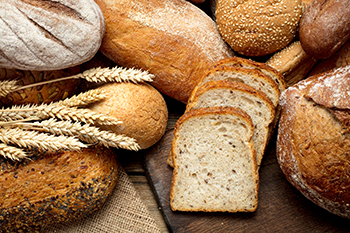 Celiac disease is often called an allergy, but that's not really accurate - it's actually an autoimmune disorder. The difference between the two is in the body's reaction to consumption of the substance it's reacting to: broadly speaking, a true allergy, like being allergic to shellfish or bee stings, causes the body's immune system to overreact to the presence of the allergen, leading to swelling and inflammation in surrounding tissues, such as itching, sneezing, rashes, or swelling of the mouth and throat, which can be life-threatening.

Celiac disease, as an autoimmune disorder, means that consuming wheat gluten, a protein found in wheat and other types of flour, causes the immune system to mistakenly attack normal, healthy cells in the body - in this case, the villi in the small intestine that help the body absorb nutrients. Thus Celiac disease often has few if any perceptible symptoms: stomach upset and diarrhea are not unusual, but Celiac can develop without symptoms until a malabsorption problem, like being iron-deficient, is identified.

What exactly causes Celiac is not well understood, but we do know that some people carry certain genes that indicate that they are more likely to develop Celiac disease. There is also some research that suggests that consuming more wheat gluten early in life may lead to a greater risk of developing Celiac.

In 2004 a team of researchers began recruiting newborns and their parents from hospitals affiliated with research centers in Sweden, Finland, Germany, and four US states (Colorado, Florida, Georgia, and Washington state). The study, known as TEDDY (The Environmental Determinants of Diabetes in the Young), aimed to enhance the understanding of the causes of both diabetes and celiac disease, as they are both autoimmune disorders to which people can have a genetic predisposition (JAMA 2019;322(6):514-523).

The babies born at these hospitals were tested for specific genetic markers believed to indicate a genetic predisposition to diabetes or Celiac disease. The families of infants with the markers were invited to enroll, of which the families of over 6,600 infants agreed to participate. At 6, 9, and 12 months, then twice per year until the age of 5, the parents submitted 3-day food records of everything the child ate for 2 weekdays and 1 weekend day.

Starting at age 2, the children were subjected to an annual blood test that measures the antibodies that are present when a person has Celiac disease. The authors considered the child to have celiac disease if the antibodies were found in high enough levels in two consecutive blood samples. Ordinarily Celiac disease is definitively diagnosed with a biopsy of the small intestine, but the study authors left the decision to perform a biopsy to the child's parents and physician. (Some, but not all, children with elevated antibodies had a biopsy; the results were reported to the study authors for inclusion in their findings.)

Using the food records kept by the parents, the authors were able to estimate the amount of gluten the children consumed, expressing it as an average of gluten grams/day. The gluten intake of those children who developed Celiac disease was compared to that of those who didn't, while taking into account total caloric intake, the weight of the child and its sex, family history of Celiac disease, and other variables.

The authors found that compared to the average daily gluten intake at the age of 2 years, every increase of 1 gram of gluten intake per day meant an additional 7% risk of developing Celiac disease by the age of 3.

It's important to note that while only about 1% of the world population is estimated to have Celiac disease, just over 20% of the children in this group - all of whom are genetically predisposed to developing Celiac - tested positive for antibodies on at least one occasion, while fully 7% were officially diagnosed with Celiac disease by the age of 15, when the study ended.

If you or someone in your family has been diagnosed with Celiac disease, and you have children, this is something to discuss with your pediatrician. We have resources here at DrGourmet.com for living with Celiac Disease, including hundreds of gluten-free recipes.