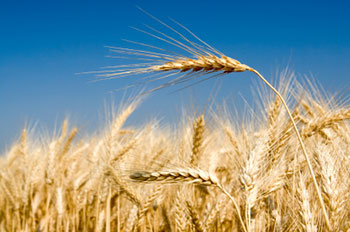 It's true that the rate of diagnosis of Celiac disease has increased in the twentieth century, with some estimates placing the autoimmune disorder's prevalence at four times greater than it was 50 years ago. There have been a number of explanations put forth for why that might be, from higher rates of diagnosis (true, but not anywhere near 4 times higher), to people simply consuming more wheat-containing products, to higher levels of the specific protein, gluten, in the wheat we eat today.

After the First World War scientists began breeding wheat to grow better and to be hardier and shorter (easier to reap). Their efforts were most aggressive in the 1950's, about the time that diagnoses of Celiac disease began to increase. While there was clearly correlation between the two, we know that doesn't necessarily mean that one caused the other.

A team of researchers in Italy decided to investigate whether older strains of wheat (those used before the First World War) were quantitatively different from those strains of wheat used today (Am J Gastro 2016;107:1248-1255). They noted that when humans digest wheat, the proteins in the wheat are broken down into smaller proteins known as peptides. Certain of these peptides have been identified as specifically related to Celiac disease and causing one of two types of immune responses in humans: either an immunogenic or toxic response. "Immunogenic" responses are what are known as "adaptive" responses - multiple exposures to these peptides are required before the body begins to recognize them as a problem. "Toxic" responses call the body's defenses into action much more quickly: usually within just a few minutes. Once the different wheat varieties were digested, would the different wheat varieties produce different levels of these peptides? This might be why people were developing Celiac disease more often than they used to.

The authors identified five different species of wheat grown by commercial farms in two different Italian regions, Parma and Bologna, and collected samples of both conventionally- and organically grown varieties from the Parma region. Three of the species are known as "einkorn," "emmer," and "spelt," respectively, with the first two being considered "old" grains and spelt being considered a modern grain. The two other species are considered "common" and "durum" wheat, with both old and modern varieties.

Multiple samples of each variety and its old, modern, conventional, or organic varieties were analyzed for their raw protein and gluten content, then run through a standardized process that closely mimics (albeit imperfectly) human digestion. The resulting peptides were then analyzed using liquid chromatography with mass spectrometry to measure, broadly speaking, the immunogenic and toxic peptides in each sample.

Proponents of organic farming may be surprised to hear that when the authors compared the conventionally-grown wheat with the organically-grown wheat, there was no significant difference between the two in the levels of toxic or immunogenic peptides resulting from their digestion. On the other hand, while there were small differences between the different species of wheat analyzed, on the whole the old versions of wheat resulted in slightly (yet statistically significant) higher levels of toxic and immunogenic peptides than the modern versions.

Obviously the authors could not test for every single possible peptide that might be related to Celiac disease, but the peptides they did test for are fairly conclusively implicated in the immune response experienced by those with Celiac disease. They conclude that "it is unlikely that modern wheat varieties are the responsible [sic] of the current coeliac disease increase," so those who might be touting a certain strain of wheat - organic or conventional, "ancient" or "modern" - as "safe for Celiacs" should not be trusted.