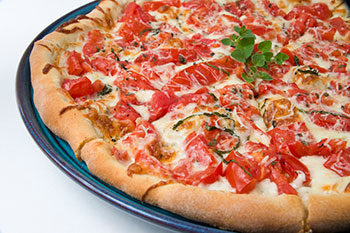 Celiac disease is often called an allergy, but in fact it is an auto-immune disorder in which consuming gluten, a protein found in wheat, barley, and rye products, causes the sufferer's immune system to attack the villi in the small intestine (villus atrophy), leading to malabsorption (inability to absorb nutrients). Those with Celiac are sometimes diagnosed because they have intestinal problems such as bloating, cramping, and diarrhea, while others have no obvious symptoms. (When I was diagnosed with Celiac disease in 2009 I had no intestinal symptoms.)

There is no cure for Celiac disease, and the only effective treatment is a gluten-free diet. While that might seem easy - "just don't eat bread or pasta!" - wheat flour is ubiquitous as an ingredient in other foods: it is used as a thickener in sauces or soups, and common ingredients, like soy sauce, are made with wheat. (Fortunately there is gluten-free soy sauce, called "tamari sauce.") Foods are commonly breaded with wheat flour, and fried foods are often breaded as well.

Which brings me to the other commonly-encountered risk for those eating gluten-free: cross-contamination. A measuring spoon used to measure wheat flour for one use, then immediately used to measure a spice or other food can introduce gluten molecules into a dish that otherwise might not contain gluten. Cooking preparation surfaces or plates can also be sources of cross-contamination: items containing flour placed on that surface might leave traces that could contaminate a gluten-free food placed on that surface later. While those with Celiac often choose to tightly control their gluten intake by only consuming what they make in their own, gluten-free kitchens at home, some do choose to eat at restaurants, either looking for foods that are labeled 'gluten-free' or carefully choosing the foods they order. In both cases the person with Celiac must communicate with their servers about their needs and rely on the restaurant using appropriate precautions to prevent cross-contamination.

Researchers at Columbia University, in association with researchers working for Nima Labs in San Francisco, sought to assess just how safe those Celiacs who eat out might be (Am J Gastroenterol 2019;00;1-6). To find out, the researchers accessed shared data from users of the Nima Gluten Sensor, a commercially-available sensor that is used on the spot to test for the presence of gluten in foods. (Caveat: Two of the six authors of this study are unpaid members of Nima Lab's Advisory Board, while a third author is the CEO of the company.) According to data published in the Journal of Food Chemistry, the sensor is highly accurate for detecting gluten at the levels of 20ppm, the maximum threshold set by the FDA for labeling a product gluten-free.

Those who use the Nima Sensor to test their foods for gluten label their results with restaurant and food name and have the option to share those test results with Nima Labs and thereby with other Nima Sensor users. For their research, the authors accessed that anonymized freely-shared data, with a total of 804 users and over 5,600 tests.

They first grouped the tests by restaurant and specific food, then further analyzed those results by the general food type and the restaurant's location by region of the United States. About 28% of the test results came from foods at Casual restaurants (such as Applebee's, Bob Evans, California Pizza Kitchen, or The Cheesecake Factory), Fast Casual restaurants (such as Chipotle, Quizno's, Panera Bread, or Smashburger) or Fast Food restaurants (Burger King, McDonalds, Domino's Pizza, or KFC). Fine dining restaurants appeared in the results so infrequently that they, as well as sweet shops and coffee shops, were excluded from analysis.

Interestingly, Fast Food restaurants had fewer gluten-free-labeled foods testing positive for gluten than Fast Casual or Casual restaurants. The authors theorize that this may be due to better training in the kitchen and better standardization of food preparation.

Foods eaten at dinner time (defined as between 5pm and midnight) were also more likely to test positive for the presence of gluten, possibly because of accumulation of cross-contamination over the course of the day or because it is a busier period in the restaurant, and thus the kitchen staff might not be as vigilant.

It's important for Celiacs to bear in mind that the a single dose of a food tested to be at the threshold of 20ppm is not going to cause intestinal damage on its own. Everyone is different, but generally 50mg of gluten is considered a level high enough to cause villus atrophy. Further, the authors caution, rightly, that the foods chosen to be tested by users may only have been those foods the users had some question about: by no means did the users test everything they purchased at every restaurant they visited.

The Nima Sensor costs over $200 - I won't be recommending to my patients (or you) any time soon, even if it's as accurate as it is purported to be. This study does suggest that avoiding pizza and pastas at restaurants, even if they are labeled gluten-free, is a good idea, and you should use extra caution when ordering in the evening.

That said, it is possible to eat out when you have Celiac disease if you are knowledgeable about hidden sources of gluten (such as the soy sauce I mentioned above), choose your foods carefully, ask specific questions of the servers and chefs, and trust that the kitchen will take appropriate precautions, such as using separate pans and utensils for your meal in addition to using gluten-free ingredients. I would recommend that you stick to a few restaurants where you can forge a relationship with the servers and chefs. Many chefs are willing to make simple substitutions, such as crudite (sliced vegetables) instead of crackers with a cheese plate or just leaving off a sauce. Don't expect them to make you a completely different meal, however - be considerate.

Here's a list of foods, ingredients, and additives that are gluten-free and those that are not gluten-free, as well as information on how to avoid cross-contamination at the grocery store and at home.