How to suppress hunger
Vigorous exercise is known to reduce appetite, at least during and immediately after exercising, but what we don't know for sure is why. Researchers have looked at various hormones (known as "gut hormones") associated with appetite regulation and there does appear to be a difference in the effects of different types of exercise on these appetite-regulating hormones. But does that actually translate to an effect on appetite, and is it different for different types of exercise?

Dieting? Maybe you should skip breakfast 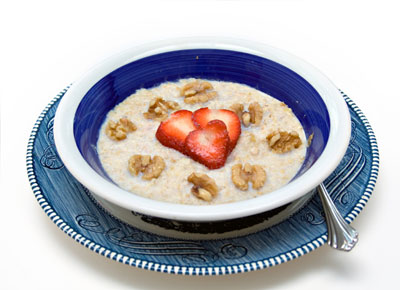 If you're working on your weight, should you eat breakfast or not? We've seen in one small study that those who skipped breakfast ate fewer calories overall - even though they did eat a little bit more than usual at lunch and dinner.

Today we have another small study that looks at skipping breakfast in conjunction with exercise. Researchers in Bath, UK (J Nutr, nxz018 https://doi.org/10.1093/jn/nxz018) recruited just 12 young men to participate in their trial who were between the ages of 20 and 26, were already physically active, were of clinically normal weight, and were taking no medications or had other conditions that might affect the outcomes of the study.

Each participant visited the lab on three separate occasions that were at least 7 but not more than 30 days apart. On all 3 occasions, each participant consumed the same evening meal before 8pm, then came to the lab at 8am local time after having nothing but water for the intervening 12 hours. In a random order, the participants were then subjected to 1 of 3 experimental conditions:

1. Control: The participants consumed a standardized breakfast of oatmeal and rested for 3 hours, with blood drawn and other tests done to measure muscle usage, calories burned, and other data.

2. Breakfast before Exercise: The participants consumed the same standardized breakfast of oatmeal, then after a rest of 2 hours the participant rode an indoor recumbent bicycle for 60 minutes at 50% of their (pre-defined) peak power output. The same tests were done at the same times as the Control group. One hour after exercise these participants were fed a pre-determined lunch and instructed to eat all they wanted, with the amount they consumed measured and recorded.

3. No Breakfast: The participants did not receive breakfast, but after the 2-hour rest period (plus the time they would have spent eating breakfast), the participants also rode the recumbent bike for an hour. These participants were also given the same lunch one hour after exercising, with the amount they consumed weighed and measured.

All three group's participants were provided with pre-weighed foods for them to consume as they chose over the course of the rest of the test day. Leftovers were returned to the lab the following morning for weighing.

It appears not. Somewhat surprisingly, the authors found that the participants who exercised did not seem to consume more at lunch when they didn't have breakfast: the difference in consumption between those exercisers who had breakfast and those who didn't was just a difference of about 160 calories, with those skipping breakfast eating the larger amount.

That said, those 160 extra calories at lunch weren't nearly the amount consumed at the lab's breakfast, which contained about 430 calories. That's a difference of 270 calories, or almost enough of a daily reduction in calories to cause a weekly weight loss of almost a pound - and that's not counting the calories burned while exercising.

This is a small study done in young, active men, so it's tough to say that this will work for everyone. However, this does suggest that if you exercise in the morning, instead of eating breakfast, it may help you to lose weight because you're less hungry at lunch than you would be if you skipped breakfast and did not exercise. This may be, as we have seen in other studies, because exercise helps reduce hunger.