Pregnancy - a time to be ACTIVE!
Exercise provides many health benefits to all of us, but there are extra benefits for pregnant women. Exercise helps keep weight gain at appropriate levels. It may help prevent gestational diabetes. It decreases problems with constipation, which also helps avoid hemorrhoids. It certainly helps you feel better. Physicians debate whether being physically fit decreases the length of labor (maybe) but it does help prepare a woman for the physically hard work of labor.

Exercise Really Is Key to Weight Loss and Maintenance
A couple of years ago I reported on a study that showed the importance of exercise in achieving and maintaining weight loss (News Bite, 11/03/06). At a minimum, the National Institute of Health and the Center for Disease Control recommend thirty minutes per day of exercise on most days of the week, or 150 minutes per week. Studies also show, however, that the difficulty is not really in losing the weight - it's in keeping it off for the long term.

How to suppress hunger 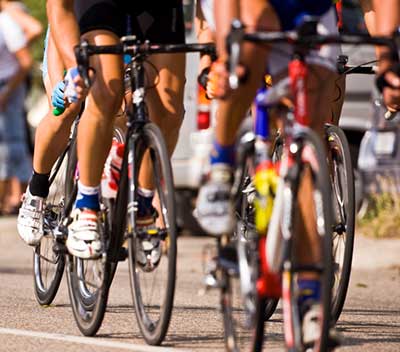 Vigorous exercise is known to reduce appetite, at least during and immediately after exercising, but what we don't know for sure is why. Researchers have looked at various hormones (known as "gut hormones") associated with appetite regulation and there does appear to be a difference in the effects of different types of exercise on these appetite-regulating hormones. But does that actually translate to an effect on appetite, and is it different for different types of exercise?

On three different occasions the participants visited the laboratory for testing. On each visit the participants rated their hunger on a standardized scale that ranged from "not hungry" to "very hungry" as well as their desire to eat sweet, sour, fatty, and salty foods. Hunger was measured at the start of each visit, then at regular intervals thereafter up to the end of the visit at 2 hours, 40 minutes. Blood samples to measure gut hormones were also collected at each visit: upon arrival, then at thirty minute intervals.

Two of the three laboratory visits featured exercise, while the third visit, during which the participant simply rested, acted as the control. During one exercise visit the participant skipped rope at a specific pace for three sets of ten minutes, with a 5 minute rest in between sets. They then remained in the lab and rested while their blood was drawn and they responded to the hunger questionnaires.

The other exercise visit entailed cycling on a stationary bike at a similar intensity designed to burn the same number of calories as the rope-skipping exercise visit. Similarly, after exercising the participant rested, had their blood drawn, and responded to hunger questionnaires.

The researchers could then correlate the levels of gut hormones with the participant's exercise sessions as well as their perceived hunger levels. The participants all experienced reduced feelings of hunger both during and immediately after exercising, with the effects of skipping rope lasting slightly longer than the effects of bicycling. Neither exercise, however, appeared to affect hunger longer than thirty minutes after exercise.

That said, any type of exercise is better than none. If you don't already have an exercise routine, Dr. Jacques Courseault has put together a simple walking program to help you get moving, along with scores of exercises you can do at home.