Low-carb beats low-cal (except when it isn't)
Demonizing carbohydrates continues to be a thing, and now it appears to be moving into diabetic treatment. Why are diabetics so concerned with carbohydrates? Here's a brief, simplified explanation: when you eat carbohydrates, they are broken down in your digestive system into glucose, which enters the bloodstream, raising your blood glucose levels. Your pancreas is then signalled to make insulin, which helps the glucose circulating in your blood to enter your cells so that those cells can make use of the glucose for energy.

Lose more weight with a vegetarian diet? Don't believe the hype
At The Goldring Center for Culinary Medicine Conference earlier this month I did a presentation with a colleague, somewhat like a debate, on whether a plant-based diet was better for you than a diet that includes animal protein. My stance, as it has always been, is that we know that moderate amounts of lean meats are not harmful - and more importantly, for the vast majority of people it's not reasonable to expect them to adopt a vegetarian diet.

Don't buy the kids' menu hype
The Kids LiveWell program was started in 2011 by the National Restaurant Association to "provide... parents and children with a growing selection of healthful menu options when dining out." 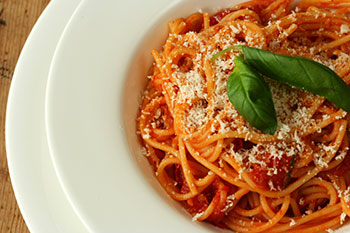 Today's article has gotten a fair amount of attention in mainstream media, with headlines like "Eating Pasta Linked to Weight Loss in New Study" (Newsweek). News sources like Sky News, Women's Health Magazine ("Eating Pasta Can Help You Lose Weight, New Study Reports"),The Daily Meal ("Eat Pasta to Lose Weight, Study Says"), and CBS Pittsburgh ("Pasta Linked To Healthy Dieting And Weight Loss, Study Says") have followed suit, with headlines that might make you think that eating angel hair, spaghetti, and lasagna will help you lose weight - as if a big plate of fettuccine Alfredo were all you needed to drop the baby weight or lose that beer belly.

As you might guess if you've followed the Dr. Gourmet Health & Nutrition Bites for a while, the truth is not just more complicated, it's not nearly as straightforward.

On the surface, the description of the study is as follows: a team of researchers searched published studies for those using randomized, controlled trials to compare the weight loss outcomes of those people consuming pasta as compared to those consuming a high-Glycemic Index diet (BMJ Open 2018;http://dx.doi:10.1136/bmjopen-2017-019438). Except there are no studies of people consuming only pasta and comparing them to those consuming any diet, let alone a specific diet.

Okay, if there is no research comparing a pasta-only diet to a high-Glycemic Index diet (the authors said), then let's compare those consuming pasta in the context of a low-Glycemic-Index diet with those consuming a high-GI diet.

Thus the authors concluded that "pasta in the context of low-GI dietary patterns had the effect of reducing body weight... compared with higher-GI control diets...."

Here are just a few of the problems with this research: first, it's not clear what type of pasta was consumed. Made with whole wheat? White flour? Rice flour? That matters, because the fiber content of a pasta contributes to satiety.

Second, pasta is not consumed alone: it's virtually always consumed with or in combination with other foods (a sauce or a topping of some kind), which affects the actual glycemic index of the meal. There's a big difference between pasta served with Alfredo sauce (essentially white flour, butter, and cheese) and pasta served with a bunch of vegetables and a light caper, butter, and wine sauce.

Third, there's no quantification of how much pasta was consumed in the reviewed studies. Saying that pasta was consumed "in the context of" a low-GI diet could mean the participants were consuming half a pound of pasta per day or a single, 2-ounce serving of whole wheat pasta once per week or less.

A disturbing point is that one could argue that the authors were intentionally misleading with respect to their results. Except they weren't: they state, "our findings... agree with earlier systematic reviews and meta-analyses of [randomized controlled trials] of the effect of low-GI dietary patterns irrespective of pasta intake on body weight...." They admit that their findings have nothing to do with pasta intake and likely have more to do with high-GI diets (that they state were more "associated with better adherence to the Mediterranean diet, a dietary pattern which has a demonstrated cardiovascular benefit."

Yet the abstract still obscures the issue, stating that "pasta in the context of low-GI dietary patterns does not adversely affect adiposity and even reduces body weight and BMI compared with higher-GI dietary patterns." They come right out and state that eating pasta causes weight loss when there is in fact no proof that there is anything more than an association between consuming pasta - as one ingredient in an overall dietary pattern - and losing weight. By that logic I could argue that eating Reese's® Peanut Butter Cups causes weight loss.

Don't take the media's word for it: if a study seems too good to be true, it usually is. Check with sources that will look more closely at a research article, and if you can, read the article yourself. While most research will be behind a paywall, some articles (like today's) will be published under Open Access.

Another red flag for this particular article is the lengthy list of competing interest disclosures (nearly an entire printed page) for three of the researchers who wrote this article. Organizations who have provided funds to the authors for various reasons (not necessarily for this article in particular) include:

The take-home message for this article: yes, you can eat pasta as part of a healthy diet, and yes, you can lose weight eating pasta. Make sure you're consuming realistic portion sizes and choose whole-grain pastas.