Vegetarians Less Likely to Die from All Causes
A recent study funded by the National Cancer Institute found that vegetarians were 12% less likely than non-vegetarians to die from any cause. Sounds like you should quit eating meat right away, doesn't it? Not necessarily. 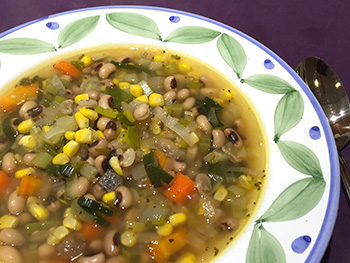 At The Goldring Center for Culinary Medicine Conference earlier this month I did a presentation with a colleague, somewhat like a debate, on whether a plant-based diet was better for you than a diet that includes animal protein. My stance, as it has always been, is that we know that moderate amounts of lean meats are not harmful - and more importantly, for the vast majority of people it's not reasonable to expect them to adopt a vegetarian diet. Quite frankly, people like their meat and they're unlikely to give it up for the long term.

At first look today's article might seem to support the plant-based side of the debate: I discovered this article through a write-up with the headline "Vegetarian Diet Better for Weight Loss." The article in question is from the Journal of the American College of Nutrition and is actually titled, "The Effect of a Vegetarian vs Conventional Hypocaloric Diabetic Diet on Thigh Adipose Tissue Distribution in Subjects with Type 2 Diabetes: A Randomized Study." Compare the two titles: it's clear the study was not created to look at weight loss as a primary outcome. Whoever wrote the article that initially caught my eye was focusing on a secondary outcome of the study, and what's worse, they didn't read very closely.

The authors recruited 74 Type 2 diabetics to participate in their six-month study. Half the participants were assigned to a control diet that cut their caloric intake by about 500 calories per day but otherwise adhered to the diet recommended by the Diabetes and Nutrition Study Group of the European Association for the Study of Diabetes (the study was carried out in Europe). Their diet included 50% of calories from carbohydrates, 20% of calories from protein, and about 30% of calories from fat, with saturated fat limited to 7% of calories from fat or less.

The other half of the participants were assigned to a vegetarian diet that included about 60% of calories from carbohydrates, 15% from protein, and 25% of calories from fat (no mention in the article of how much saturated fat was allowed). Other than vegetables, grains, legumes, fruits, and nuts, the participants were allowed up to 1 portion of low-fat yogurt per day. As with the control group, this vegetarian groups' diet cut about 500 calories from each individual's daily allotment.

All meals were provided to the participants by the people running the study.

For three months the participants pursued their usual pre-study exercise habits, then for the following three months (the second half of the study) they were prescribed an individualized exercise program to be performed with a trainer at the sports center twice per week plus one time at home.

At the start of the study, at the midpoint, and at the end of the study the participants were weighed, provided blood samples for cholesterol and other scores, were subjected to an insulin sensitivity test, and underwent an MRI to measure the amount of fat in one thigh.

The authors found that those on a vegetarian diet reduced the amount of fat within the thigh muscles (as opposed to just under the skin) to a greater extent than those on a conventional diet. The vegetarian dieters also lost about twice as much weight as those on a conventional diet (about 13.7 pounds on average, as compared to about 7 pounds) - but at first they also lost over twice as much muscle tissue, gaining some of it back after the addition of exercise halfway through the program.

After correlating the amount and locations of thigh fat lost with the participants' changes in HbA1c (a measure of glucose control) and other markers, the authors conclude that since the vegetarian diet reduced intra- (within) muscular fat more than a convention diet, those changes in fat storage were associated with positive changes in insulin resistance.

The writeups, of course, conclude that a vegetarian diet led to greater weight loss. But did it? A single paragraph in the published study notes that despite receiving all of their meals from the lab, people still had trouble sticking to either diet. "High adherence" was considered to be consuming no more than 100 calories more than prescribed, while "medium adherence" was consuming less than an extra 200 calories - and "low adherence" consuming an extra 200 calories or more per day. 22.5% of those on a vegetarian diet had low adherence - meaning that instead of cutting 500 calories per day, they only cut 300 (or less). Nearly 30% of those on a conventional diet also had low adherence. On the other hand, 55% of the vegetarians had high adherence, compared to only 32% of those on the conventional diet.

More people stuck to their prescribed vegetarian diet, so of course they lost more weight. I would guess that this has more to do with the lower calorie density of vegetables, fruits, and legumes than whether people ate meat or not. You have to eat an awful lot of vegetables to consume the same number of calories in a piece of steak: a 3.5-ounce piece of sirloin has about 200 calories, while you'd have to eat 21 ounces of broccoli or more than 10 ounces of canned black eyed peas to get the same number of calories. There's still no magic bullet, folks. It's the quality and the quantity of calories you consume that really matters.