Sugar-Sweetened Beverages Affect More than Kids' Weight
You're probably well aware that drinking sugar-sweetened beverages like sodas or sweetened fruit juices can lead to overweight or obesity through the additional calories they contain. And you're probably also well aware that those who are overweight or obese are at an increased risk of health problems ranging from diabetes to heart disease to cancer.

Kids who cook
A couple of weeks ago we looked at a study that reinforced other research showing that kids will eat more when they are served more (and that larger serving sizes for parents often translate into larger serving sizes for kids). As a strategy to get kids to eat more fruits and vegetables, we've seen that this works pretty well, as does hiding vegetables in other foods and simply serving those veggies with dip (as any parent could tell you: my wife likes to call this "duh science"). 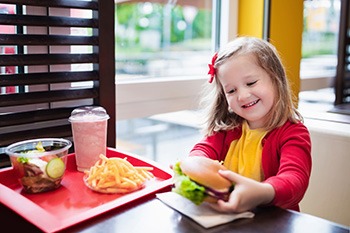 The Kids LiveWell program was started in 2011 by the National Restaurant Association to "provide... parents and children with a growing selection of healthful menu options when dining out." The 19 initially participating restaurant chains, which at its start included Denny's, Burger King, and Outback Steakhouse, agreed to offer a selection of children's items that meet the following criteria:

The program started with about 15,000 participating locations and more than doubled in size to 42,000 locations in 2014, and the program includes a smartphone app to help parents find which restaurants are offering the healthier meals.

That's all very well to commit to offering one option, but they did say "a growing selection." During that same period, other restaurants have made commitments to improving their children's offerings, including changing the default sides from french fries to fruit (McDonald's) and removing soda as the default beverage (including Wendy's and Burger King). Have those restaurants participating in the LiveWell program improved their children's menu selections overall? And how does that compare with those restaurants who are not part of the program?

Fortunately, the New York City Department of Health and Mental Hygiene has created and maintains a website, www.MenuStat.org, that is a collection of nutrition data obtained from the websites of the United States' top-selling restaurant chains. A team of scientists from Harvard, Johns Hopkins, and the University of Pennsylvania used the data from the website to complete an analysis of over 4,000 children's menu items in 45 national restaurant chains (Am J Prev Med 2017;52(3):284-291).

What they found is not encouraging. In 2012, the average children's entrée among participating LiveWell restaurants had 373 calories, 796 milligrams of sodium, and just over 6 grams of saturated fat. The good news is that the participating restaurants cut calories and sodium in their entrée average by small amounts (about 5% and 3%, respectively) for the following 2 years, but in the third year (2015) there were only 12 fewer calories than in 2012. At the same time, however, they were increasing the number of calories in their side dishes and in their beverages in amounts that roughly equaled the amounts cut in the entrées.

Meanwhile, the restaurants not participating in LiveWell started out in 2012 with 349 calories, 788 milligrams of sodium, and 6 grams of saturated fat in their average entrée, and although those numbers remained about the same through 2015, the averages for their side dishes actually dropped as much as 19%!

The authors note, as well, that although the number of soda options available in all of the restaurants declined over the period they analyzed, at the same time the number of flavored milk options increased: just because it's milk does not mean it's not a sugar-sweetened beverage.

Don't let the presence of the Kids LiveWell logo on restaurant menus fool you into thinking that all of their children's menu items are healthy: look for the specific items that are approved, and check to make sure you follow any special ordering guidelines, such as requesting no added salt during cooking. Most importantly, check the restaurant's website ahead of time to look for the healthiest options regardless of whether the restaurant participates in the LiveWell program or not. It's always best to plan ahead to eat healthy, for you and your kids.