Put down the potatoes, and step away from the french fries
A group of 84,555 women were followed for 20 years (1980-2000). Study participants, all white and without a history of diabetes, cancer, or cardiovascular disease, were asked to complete food consumption questionnaires on a yearly basis, and were asked about the use of postmenopausal hormones, smoking status, body weight and level of activity every two years.

When the Glycemic Index Doesn't Measure Up
The Glycemic Index is of interest to those seeking to help prevent or treat diabetes because it measures the effect that a specific food has on a person's blood sugar after the person eats it. Unfortunately, the results of studies assessing the link between GI and diabetes risk have been mixed.

Nuts and Heart Disease & Diabetes
I've reported in the past about the positive effects of nuts (specifically pistachio nuts) on cholesterol. It seems that almonds may have a positive effect on your risk of cardiovascular disease (CHD) or diabetes. 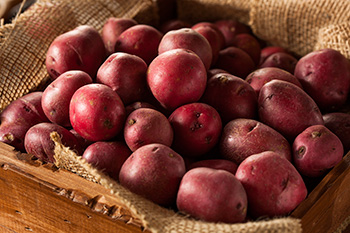 Potatoes get a bad rap. While they're primarily a source of starch (as much as 23% by weight for some varieties), people forget that they are in fact vegetables, and as such as not only low in calorie density, they're also good sources of potassium, Vitamin C, folate (so important during pregnancy), fiber, and and polyphenols (a source of antioxidants).

As with many ingredients, the problem with potatoes are not the potatoes themselves, but how you cook them or what you eat them with. A baked potato with a little sour cream or cheese is one thing - a baked potato with a quarter-cup of butter and the same amount of cheese, or one cut into strips and deep fried into French fries, are another thing altogether.

Ten years ago I shared with you an article that suggested women who consumed the most potatoes were 13% more likely to develop type 2 diabetes than those women who ate the least potatoes. Those who ate the most french fries, however, were 29% more likely to have type 2 diabetes than those who ate the least, even after taking Body Mass Index into account. The lowly (and plain) potato was still tarred with the brush of additional diabetic risk.

Ten years later, a team of researchers at the University of Copenhagen have performed a review of published articles on potato consumption and the risk of either type 2 diabetes, obesity, or heart disease (Am J Clin Nutr 2016;104:489-98). Of the 13 articles they identified that met their requirements for aim, type, and quality, five studies investigated a possible link between potato intake and obesity. These studies lasted between 2 and 20 years and included over 170,000 individuals. The results here were mixed: 2 studies found a link between potato intake and measures of overweight and obesity, while 2 did not. Boiled, baked, and mashed potatoes seemed to contribute to weight gain the least (about 1/4 kilogram over 4 years), while french fries contributed the most: 1.5 kilograms over 4 years.

Seven of the identified studies looked at type 2 diabetes risk and potato intake and included over 300,000 persons, with a study length between 4 and 20 years. Again, 2 studies showed potato intake to be associated with higher risk of diabetes, while 2 more saw a lower risk, and another 2 found no association at all. The higher risk was seen only in studies limited to women, while one study limited to only men found no association as long as the potato intake measured did not include french fries. When only intake of french fries was considered, however, 3 large studies found that a higher intake of fries meant higher risk of type 2 diabetes.

Finally, the one large study that looked at the risk of heart disease found no association between potato intake and risk of stroke, but the authors note that the study did not look at potatoes by method of preparation, making it difficult to say whether it is the potato itself or the preparation that might be the problem.

It's pretty clear that eating a lot of French fries is bad for you. But then, if you're eating a lot of French fries, what else are you likely to be eating? This is why demonizing a particular food ("potatoes are bad," or "bread is bad") is, well, a bad idea. Better to enjoy a wide variety of foods prepared in a healthful way, and if you must have fries, save them for a treat.