Does aluminum cause Alzheimer's?
I have to ask if you think it is wise to propose using aluminum foil in your Halibut in Foil with White Beans and Olives recipe, given the possibility of it perhaps, after long usage, contributing to Alzheimer's? Apparently there is some concern about pots made from aluminum. 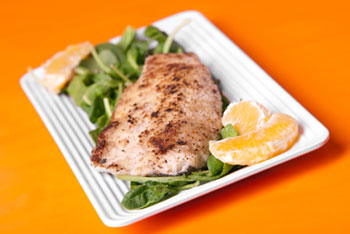 We know that following an overall Mediterranean-style diet can reduce your risk of developing Alzheimer's Disease by as much as 60%. Some research has suggested that it is the fish intake that has that effect, and yet other studies focus on the Omega-3 fatty acids found in fish. For example, in 2007 I reported on a prospective study that looked at the effect of eating fish on the participants' scores on a common cognition test, the Mini Mental Status Exam (MMSE). In a five-year study of over 200 Netherlanders, those who ate the least fish had their scores in the MMSE fall four times faster than those who ate the most fish - regardless of the type of fish consumed. On the other hand, in 2006 researchers in Sweden gave participants with mild to moderate dementia either an Omega-3 supplement or a placebo for 6 months. Those with Alzheimer's Disease saw their cognition decline more slowly if they were taking the supplement.

With today's research, a team in Pittsburgh sought to clarify this distinction. They made use of data gathered through the Cardiovascular Health Study Cognition Study (CHS-CS), which is part of the larger Cardiovascular Health Study, a large-scale, long-term prospective study of risk factors of heart disease and stroke in persons over the age of 65. Those in the Cognition Study were evaluated for signs of dementia or mild cognitive impairment and had an MRI done of their brains. For their research, the Pittsburgh team limited their study to those participants who had no sign of dementia or cognitive impairment (Am J Prev Med 2014;47(4)444-451).

They looked at the MRIs of these 260 men and women and measured their brain volume (both overall and at several specific locations), then correlated that volume with the amount of baked or broiled fish the participant had reported consuming in a dietary questionnaire completed the year before the MRI was performed. Blood tests performed that same year confirmed that the participants' blood levels of Omega-3s was consistent with the amount of fish they had reported eating.

They found that brain volumes in two areas of the brain that are related to memory and cognition were larger in those participants who reported eating fish at least once per week. Most interestingly, those volumes were NOT related to the amount of Omega-3s in their blood.

The authors caution the reader to avoid taking these results as suggesting that Omega-3s had nothing to do with maintaining brain volume. Those participants who ate more fish also tended to have more education, which might mean a better lifestyle in general. This does mean that fish is definitely brain food, to quote that old saying. While taking Omega-3 supplements might be a good option for those who are allergic to fish, this study suggests that simply eating fish is best, both for the Omega-3s and for your brain.