Avoid Alzheimer's - drink your juice!
Recent studies have suggested that antioxidant vitamins from fruits and vegetables (not from supplements) may help delay the onset of Alzheimer's disease. Other than vitamins, the most abundant source of antioxidants in foods are substances known as polyphenols that are primarily found in the skin or rind of fruits and vegetables. The method of preparation of these foods then has a big impact on the amount of polyphenols in the resulting cooked food.

Omega 3 Fat Supplements and Alzheimer's Disease
We know that there are tremendous benefits to eating fresh, healthy foods. Numerous studies show that eating more fish, eating foods that are high in Vitamin C and other antioxidants as well as whole grains can prevent many conditions, including heart disease, diabetes, stroke, cancers and Alzheimer's disease. 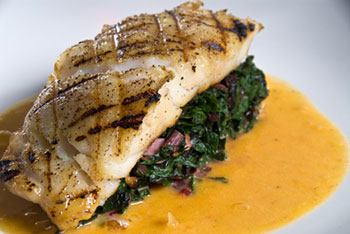 I have written many times about the benefits of eating fish at least a couple of times a week. Most of the studies so far have been "retrospective" where researchers look back at information and work to draw conclusions. There have been such studies about the association of fish consumption and Alzheimer's Disease, but a group of researchers report on a prospective study in this month's American Journal of Clinical Nutrition (2007;85(4):1142-1147).

The study was carried out over 5 years and involved 210 participants in a large ongoing evaluation of residents in the Netherlands. The participants had been tested at the beginning of the research with a screening test used by physicians to detect dementia -- the Mini Mental Status Exam. The MMSE is a 30 question test that has been shown to be reliable both in clinical practice and as a research tool.

Information on the amount and type of fish consumed by those in the study was collected as part of in home questionnaires. dietitians asked about all aspects of the diet and fish consumption was calculated by adding all types of fish.

At the beginning of the study the mental status of the 210 participants did not differ. Over the five years there was decline in both groups but the MMSE scores of those who did not eat fish declined at a rate 4 times that of those eating fish twice a week or more. There was a suggestion from the data that eating more fish results in less decline.

I would have liked to have seen more participants in the study to help increase the reliability of the results, but this is another of many studies that show that eating fish is good for you. More and more research shows that not only is it good for your heart, but that fish really is "brain food."