Excerpts From a Dr. Gourmet Interview on Diet and Aging
Next week everyone will be working on their New Year’s resolutions. I have read estimates that as high as 75% of people will resolve to lose weight or eat better. Certainly changing the way you eat is a good way to lose weight but there’s other great reasons. Recently I was interviewed about the effects of diet on the ageing process. Some of this you may have read in past columns but when it is all taken together the research is pretty compelling. 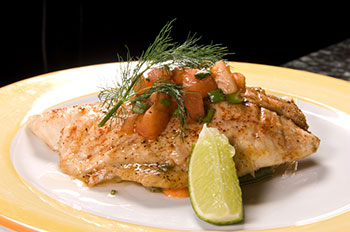 We know that there are tremendous benefits to eating fresh, healthy foods. Numerous studies show that eating more fish, eating foods that are high in Vitamin C and other antioxidants as well as whole grains can prevent many conditions, including heart disease, diabetes, stroke, cancers and Alzheimer's disease. The research on taking supplements such as extra Vitamin C or fish oil has been disappointing, however. (In the case of Vitamin E it appears that high doses actually increase the risk of death.)

We have good studies that shows eating fatty fish high in Omega 3 fats are beneficial. One area that they appear to help is with the prevention of Alzheimer's disease. A group of researchers in Sweden considered that using Omega 3 supplements might help those who already have mild or moderate Alzheimer's. They created a very nice study by sorting 204 individuals with mild to moderate dementia to receive either Omega 3 supplements or a placebo for six months (Arch Neurol 2006; 63(10): 1402 - 1408).

Participants were tested on their levels of dementia before and after the study to see if the supplements helped to slow the decline in brain function. They used a standard Mental Status Exam that is made up of thirty questions. At the end of the 6 month period there was no difference in mental decline between the two groups. All participants then took the Omega 3 fats for a second 6 month trial and again there was no difference between the two.

The researchers did look at a sub-group of those with very mild, early stage Alzheimer's disease. They found that in those taking the supplement the rate of decline was slowed. This was true when measured at both 6 and 12 months. While this was a small portion of the participants it may indicate that taking supplements can have a protective effect.

While the research on eating healthy has shown how powerful eating great food can be, the research on supplements has been disappointing. It is encouraging, however, to think that taking Omega 3 supplements early in a disease might help slow the progression. For my money the proof that eating fatty fish helps prevent disease is much more compelling (and tastier).