Take a moment and eat less, even when you're hungry
So many factors outside of ourselves can influence what we eat, when, and how much. Just having snacks around can make you want to eat them (Bite, 9/18/13), and using larger plates or bowls can lead you to eat more, even if you know better (Bite, 10/06/06), the food isn't very good, or you're not even hungry. 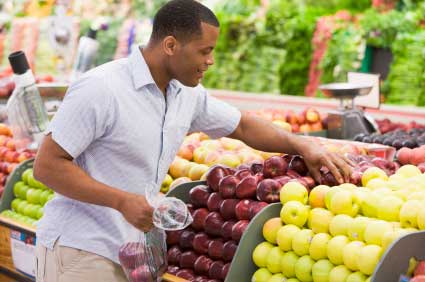 You've probably noticed that it's not a good idea to go grocery shopping when you're hungry. It's all too easy to end up buying a whole bunch of things you didn't plan on buying just because it looked good and you were hungry.

Brain scans of people who have been fasting (i.e., are hungry) and are shown pictures of high calorie foods show higher levels of brain activity in those areas of the brain associated with reward. This isn't the case with lower calorie foods, however. Brian Wansink and his colleagues at Cornell University noted this and wondered if shopping while hungry meant buying more food in general, or if people tended to buy higher calorie foods. They performed two studies, one in the lab and one in the field (JAMA Intern Med 2013;173(12):1146-1148).

In the first study, nearly 70 men and women were instructed to avoid eating for five hours before participating in a study in the lab. A randomly chosen half of the participants received a snack of Wheat Thins upon arrival, while the other half did not (so they remained hungry). Then they were asked to shop in a simulated online grocery store in which a higher-calorie item was displayed next to a lower-calorie item.

If you must shop when you're hungry, think ahead and make a list. Then stick to it. Better yet, have a snack beforehand (a piece of fruit or some nuts). The best option, of course, is planning all your meals for the week. You can then do all your grocery shopping on one day, list in hand, and avoid the hazards of shopping while hungry completely.