The little things do matter. (A lot!)
Think you might be influenced by a pretty label on a package? Nah... not me! Dr. Brian Wansink says that you are, and the subtle clues that contribute to not just what we consume but how we view it make a tremendous difference in how we eat. In a study that substituted a stylish wine label on $2.00 bottles of wine, people reacted in wildly different ways when half of them were told that the "new" wine was from California.

Size Does Matter
Many diet plans and diet books for years have recommended using small plates to make it look like you are eating more. This concept was put to the test by two researchers, Brian Wansink and Matthew Cheney. In a research letter published by the Journal of the American Medical Association (JAMA Vol. 293 No. 14, April 13, 2005) they showed that the size of serving bowls makes a difference on the amount people eat.

Right-Size Your Recipes
As you might expect, I collect cookbooks. The first cookbook I bought for myself was thePeanuts Cook Book, but the one my mother used most (and I bet yours did too) wasThe Joy of Cooking. I actually have several copies of this venerable cookbook, from the two-paperback edition from 1974 to the 1946 hardback that my wife bought me for Christmas last year.

Out of Arm's Reach 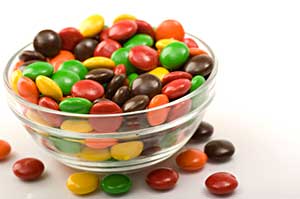 Oh, those office candy dishes. I have so many patients who have told me that their downfall is the little bowl of candy kept on their desk - or that of a colleague. Even if the dish isn't on their own desk, they tell me, every time they walk past that dish they just can't resist taking a candy or two.

Brian Wansink, of Cornell University, noted that there is research to suggest that it's the simple convenience of many snack foods that leads to higher intake. Potato chips can be eaten straight out of the bag, for example, as opposed to microwave popcorn, which requires that extra step of preparation before eating. Further, studies in developmental psychology show that the more effort one must put into a particular activity, the more likely it is that you'll remember it: in the case of eating, you're much less likely to do it mindlessly.

Dr. Wansink and his team designed a study to find out whether people would eat less of an easy-to-eat food that required more effort to acquire (Int J Ob 2006;30(5):871-75 [paper retracted]). As you might have guessed, he used the ubiquitous office candy dish as the source of the easy-to-eat food.

Forty female administrative staff at the University of Illinois, all between the ages of ~30 to ~50, participated in the study. A covered bowl full of candy was placed in the vicinity of their office for four weeks. The participants were informed that due to "cost constraints" they were not allowed to share the candy with other staff or take it home, and that they should not move the bowl. In what is known as a 2 x 2 design, the type of bowl and its location were as follows for one of each of the four weeks:

The researchers calculated the average amount of candy eaten each week by each of the staff under the four conditions and compared them. Generally speaking, they found that people ate more candy from the clear dish than the opaque dish, and they ate more when the candy was at arm's reach rather than across the room. On average, the women ate about 3 candies per day when they could not see the candy through the bowl and had to get up from their desk to get the candy, while they ate nearly 8 per day when the bowl was clear and on their desk.

Well, the first thing you should take from this is that if you're working on your weight, don't keep a candy dish on your desk. The larger message, however, is that taking that extra moment to get up and get the candy gave the participants, they said when asked, extra time to consider whether they really wanted to eat that candy or not. How can you add that extra moment into your snacking? Share your ideas in the comments!