Coffee, Tea and Brain Tumors
Brain tumors make great television, but the truth is that they're pretty rare: the risk of developing a brain or nervous system tumor of any kind are between 4 and 8 per 100,000 person-years. Since they're so rare, there's very little opportunity for studying prevention.

Have a cup of (green) tea
The polyphenols (antioxidants) in green tea have been shown in animal and in vitro studies to have protective benefits against cardiovascular disease and cancer. Human studies, however, have been small and their results varied. Drs. Kuriyama and Shimazu and their colleagues in Japan made use of data from a large, long-term prospective study to analyze the relationship between green tea consumption and the mortality rates due to cardiovascular disease, cancer, and all other reasons for death. 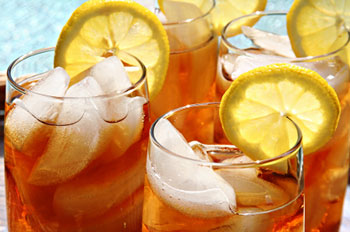 The flavonoids found in grapes, tea, red wine, cocoa, and coffee have been linked to all sorts of positive health effects, from helping protect cognitive function to helping to protect you from diabetes.

Green tea in particular appears to help protect you from heart disease, but in that same study, done in Japan, it did not appear to protect people from cancer. The researchers in that study theorized that this was due to other health factors, especially the high levels of smoking in Japanese men. In China, on the other hand, very few women (less than 3%) smoke or even drink regularly.

Researchers in China noted this issue when they designed a study to assess the possible effects of drinking green tea on the risk of digestive cancers in women (Am J Clin Nutr 2012;96(5):1056-63). (For women worldwide, digestive system cancers are second only to breast cancer in terms of the number of cases diagnosed each year.) They made use of information gathered through a long-term, large-scale study of Chinese women known as the Shanghai Women's Health Study. This study began in 1996 and the women in the study were all between 40 and 70 at the start of the study. The women provided medical and demographic information, as well as lifestyle information such as smoking status, alcohol intake and exercise levels, along with responding to a detailed dietary questionnaire that included questions about their intake of green tea.

Those women who had ever smoked or who drank alcohol regularly were excluded from the study, as were those who had been diagnosed with cancer or a gastrectomy (partial or full removal of the stomach). This still left the researchers with almost 70,000 women in the study sample.

In 2000 the researchers analyzed the amount of tea drunk by those who were diagnosed with any type of digestive system cancer and then compared that with those who did not develop a cancer of that type. In their analysis, they adjusted for Body Mass Index and Waist to Hip ratio; education level; amount of exercise; meat, fruit and vegetable intake; family history of diabetes, and family history of digestive cancers.

They found that those women who drank green tea at least 3 times per week and did so for 20 years or more were 28% less likely to develop any type of digestive system cancer than those women who never drank tea. That might seem intimidating to those of us Westerners who don't drink tea - 20 years? - but the good news is that those women who had been drinking green tea three times per week for a minimum of only 6 months still saw a 14% reduction in their risk of digestive system cancers.

Bear in mind that these women neither smoked nor drank. That does not, however, mean that drinking green tea several times per week may not also have protective effects for you. Have a cup of green tea (iced or hot) at your afternoon break or in place of a soda a few times a week. The antioxidants in the green tea are definitely great for you, and may help protect you from digestive system cancers at least a little bit.