Exercise for Your Brain
Several years ago I reported on a study that confirmed previous studies looking at the connection between following a Mediterranean style diet and the risk of developing Alzheimer's Disease (Bite, 10/18/06). Remember the nine areas of the Mediterranean-style diet? In this study, those whose diet matched the Mediterranean diet in 6 to 9 areas had a 60% lower risk of developing Alzheimer's than those whose diet only matched in 1-3 areas.

Fish Really Is Brain Food!
I'm sure you've heard the old saw, too: "Fish is brain food!" While research has shown that eating fish and omega-3 fatty acids have been associated with lower risk of Alzheimer disease and stroke, a study in the Archives of Neurology this month (Arch Neurol. 2005;62:1-5) seems to show that eating fish helps reduce the cognitive decline associated with aging. 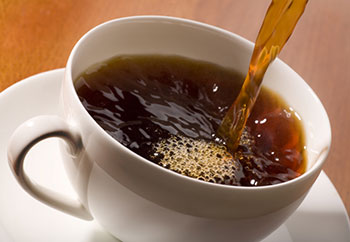 Brain tumors make great television, but the truth is that they're pretty rare: the risk of developing a brain or nervous system tumor of any kind are between 4 and 8 per 100,000 person-years. Since they're so rare, there's very little opportunity for studying prevention. A group of European researchers noted that a study in the United States had suggested that there was an inverse relationship between coffee and tea intake and the risk of glioma, a tumor that most often arises in the brain (although it does sometimes appear in the spinal cord).

The European researchers sought to confirm the American findings by using information gathered through the EPIC study, an ongoing, long-term, large-scale study including over 520,000 men and women in 10 European countries (Am J Clin Nutr 2010;92(5):1145-50). Upon enrollment in the study, each participant filled out a food frequency questionnaire to detail their typical diet, including coffee and tea intake, over the year prior to joining the study. They also provided information on their level of physical activity and other demographic information such as smoking, height and weight.

They found that those who drank at least 100 milliliters (about 3 ounces, or a little less than 1/2 a cup) of coffee or tea each day did, indeed, have a reduced risk of glioma - at least 19% lower risk. There was no effect seen on the risk of meningioma, however.