Tea and Digestive System Cancers
The flavonoids found in grapes, tea, red wine, cocoa, and coffee have been linked to all sorts of positive health effects, from helping protect cognitive function to helping toprotect you from diabetes.

The Evidence for Weight Loss Supplements
With the number of overweight and obese adults in the United States estimated to be over 2/3 of the total adult population, it's no surprise that in 2010 US consumers spent an estimated $2.4 billion on weight loss supplements and meal replacements.

Good News for Those Who Love Chocolate, Wine or Tea
I've talked before about the positive effects of polyphenols, which are found in fruits like grapes and in tea, red wine, cocoa and coffee. The largest subtype of polyphenols are called flavonoids. There's been some really interesting research linking the intake of flavonoids and a reduced risk of Alzheimer's Disease and dementia in general.

Have a cup of (green) tea 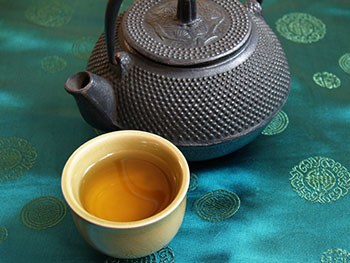 The polyphenols (antioxidants) in green tea have been shown in animal and in vitro studies to have protective benefits against cardiovascular disease and cancer. Human studies, however, have been small and their results varied. Drs. Kuriyama and Shimazu and their colleagues in Japan made use of data from a large, long-term prospective study to analyze the relationship between green tea consumption and the mortality rates due to cardiovascular disease, cancer, and all other reasons for death (JAMA 2006;166:1255-1265).

The study, called the Ohsaki National Health Insurance Cohort Study, enrolled 40,530 men and women between the ages of 40 and 79 who lived in the Miyagi Prefecture in northeastern Japan. (In this region, over half the population drinks 3 or more cups of green tea per day.) Persons with a history of cancer, heart attack, or stroke were excluded from the study. The researchers administered a questionnaire that asked about the subjects' "everyday diet" and requested information on such items as frequency of green tea, oolong tea, black tea, or coffee consumption; tobacco use; exercise level; body weight; height; and 36 food items.

After 7 and 11 years, the researchers identified all those study participants who had died and ascertained their cause of death, then correlated their cause of death with their level of green tea intake. They found that in general, the more green tea an individual drank, the lower their risk of death due to all causes. Indeed, that association was stronger for women than for men: For women who drank 5 or more cups of green tea per day, their risk of death was reduced by 23% over those women who drank only a cup or less. For men, that reduced risk was only 12%.