Three Meals a Day
Last week I discussed the structure of dinner and what a good healthy and balanced evening meal should look like. I have felt for a long time that eating sensible regular meals and snacks is the key to being healthy and maintaining a healthy weight. In listening to my overweight and obese patients I often hear them say, “Well, I don’t eat during the day. I only eat dinner.” Sometimes they will talk about eating late in the day.

Frequent Snacking
At nearly every lecture I give about eating healthy, somebody asks about snacks. Although there's no scientific evidence that eating more frequently speeds up one's metabolism, people seem to have bought in to the idea, and so snacking, at least among my patients, has become the norm. The problem is that it sounds plausible: if it's true that your metabolism slows when you go without food overnight (actually true), then eating more frequently would speed it up, right?

Could what's good for you be good for the planet?
One of the reasons that fad diets fail is not that they are physically bad for you (although some might be): the problem is that people can't adhere to the diet for the long haul. That's usually what I mean when I talk about a "sustainable" diet: I am talking about a pattern of eating that one can reasonably stick with for the long term.

A couple of years ago I wrote about two related strategies for reducing the number of calories in a dish. The first was to enhance flavor by choosing lower calorie, high-flavor ingredients. The second, and more difficult, strategy was to pay careful attention to those ingredients that have more calories by weight and to use them very carefully.

As it turned out, a recent study had compared the overall daily caloric intake for subjects on four different diets:

All three of the variations of the standard diet saw the participants eating fewer calories overall. The catch, however, is that for all of the non-standard meals, the subjects were presented with smaller portions or reduced-fat versions of their meals, or both. The subjects still found the foods to taste as good and be as satisfying as the standard diet. 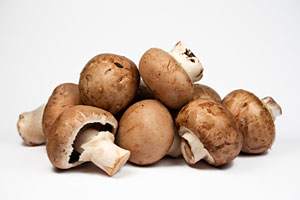 In a significant twist on this research, researchers at Johns Hopkins School of Public Health compared foods made with beef with the same foods made with ground mushrooms (Appetite 2008; 51(1):50–57).

They recruited 54 men and women of varying Body Mass Indices (normal, overweight, or obese) to have lunch at the School of Public Health on eight occasions. On four occasions the subjects were served a lunch meal (Lasagna, Savory Napoleon, Sloppy Joe, or Chili) that was made with ground beef; on four other occasions they were served the same four different meals but with the same volume of ground mushrooms substituted for the ground beef. On each of the eight occasions, the subjects were asked to keep detailed records of what they ate later in the day, how hungry they felt, and how satisfied they felt with their lunch meals.

The researchers told their subjects that they were comparing the “acceptability” of mushrooms versus ground beef in the diet. They found that although the subjects were aware that they had been served mushrooms instead of beef, they still rated meat and mushroom meals about the same in terms of how they tasted, whether the meals satisfied their appetite for lunch, and how satisfied they felt later in the day.

This meant that on each individual day, eating mushrooms in their lunch meant eating an average of 420 calories less each day than they did on days that they ate ground beef in their meals at lunch. (Recall that losing 1-2 pounds per week means eating about 350 fewer calories per day!)

This study supports the earlier study by demonstrating that even if people know that they’re not eating the same version of the expected food, they’ll still behave as if they did – in terms of total calories eaten that day – if the food is the same volume and just as satisfying as the original. Dr. Gourmet recipes improve on this by not only making the foods just as delicious and satisfying as the full-fat originals, but also by teaching you what are appropriate serving sizes.