Is eating cocoa powder good for you?
There should be no problem with consuming the three teaspoons of unsweetened cocoa powder. There has been a lot of research that indicates the antioxidants including polyphenols and flavonoids are very beneficial. 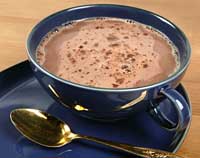 Especially, it appears, if you have heart disease. Like tea, coffee and wine, cocoa is rich in flavonoids - plant compounds that have been associated with a reduced risk of Alzheimer's Disease (Good News for Those Who Love Chocolate, Wine or Tea), as well as improving cholesterol scores (Plant Sterols in Chocolate) and even high blood pressure (Hot Chocolate for High Blood Pressure).

Yet that last study about hot chocolate was a meta-analysis: a grouping of results of other studies. A new study performed in Spain (the same country that brought you studies about beer-drinking nuns: Alcohol-Free Beer: an Antioxidant?) focused on the effects of cocoa on heart disease (Am J Clin Nutr 2009;90(5):1144-50). Or more specifically, on the biomarkers of the inflammatory response which leads to heart disease.

They recruited 42 men and women who were considered to be at high risk of heart disease. They were all over 55 years of age and had at least three of the following risk factors for heart disease: current smokers, high blood pressure, high LDL cholesterol (the bad guys), low HDL cholesterol (the good guys), obesity and family members with heart disease. The participants were randomly assigned to one of two groups in what is known as a crossover study. For the first four weeks, one group had two cups of hot cocoa made with milk each day, while the other group had two cups of milk alone. Then the two groups switched and continued for an additional four weeks.

The researchers instructed the participants to avoid other foods containing cocoa and limit foods containing flavonoids, including tea, coffee, wine and olive oil. Blood pressure measurements, along with blood tests, were taken before and after each four-week period of the study, then compared.

While the volunteers did gain an average of a pound over the eight weeks; that's likely due to the additional calories in the hot cocoa and milk, even though skim milk was used. Their blood pressures, however, were unchanged, as were their total and LDL cholesterols. Their HDL cholesterols did improve during the hot chocolate portion of the study - not a lot, but a clinically significant amount nonetheless. Most importantly: the biomarkers of that initial phase of artherosclerosis (heart disease) were indeed significantly reduced.

This is a very small study, but well designed. The take-home message here is that those flavonoids can help slow the progression of heart disease. While cocoa is a good source of flavonoids, so is tea, wine and coffee - and coffee, without milk or sugar, has virtually no calories. In this holiday season, keep in mind that cocoa and wine, while good for your heart, contain calories: about 230 for a typical cup of cocoa using the instructions on the back of the cocoa box, and about 100 for a glass of wine.